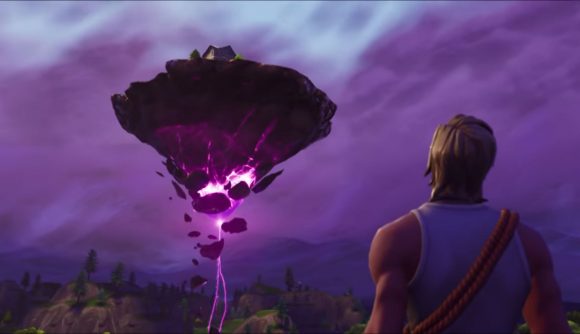 The saga of Kevin the Fortnite Cube is a long and complex one. One day he seemed simply to appear on the map, all ominous and purple and beautiful. From his imposing beginnings, he began tracking back and forth across the Fortnite island, a journey that culminated in Loot Lake’s transformation, first into a bounce house, and then into a swirling vortex of chaos.

Now it seems that Kevin is settling down, as it would appear that he’s about to become a dad! Dataminers have discovered a set of new challenges relating to a cosmetic known as Lil’ Kev.

Yesterday, a Fortnite datamining account named FNBRLeaks tweeted to reveal the Lil’ Kevin Challenges. Completing the set of three (relatively easy) tasks will reward you with a new cosmetic, the adorable and appropriately-named Lil’ Kev. The little guy takes after his dad in his polygonal bone structure, but appears to have developed sight. His new sensory awareness comes via a pair of googly eyes stuck to one of his sides, presenting something resembling a face.

The Lil’ Kevin Challenges are very easy. You’ll need to gain 5,000 XP, play 15 matches, and outlive 500 opponents – all things that can be done just by playing the game. Complete all three challenges, and you’ll unlock the new cosmetic, although at the moment I can’t tell if Lil’ Kev is supposed to be a piece of Back Bling or one of the new Fortnite pets.

Kevin appears to be up to something more – he’s been zigzagging across the map for a while now, and Epic is teasing a momentous event due to take place this weekend. Given that Lil’ Kev hasn’t made his way to the game yet, I’d imagine that whatever this event is could be in some way related to him.