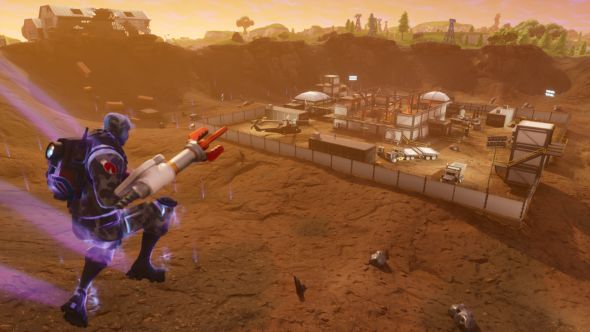 Fortnite Battle Royale’s first three seasons have suffered from the same problem: the western side of the map was too good. Resource rich areas in easily-defendable terrain drew players away from the low-lying fields of the east. Epic kicked off season four by addressing this imbalance:  they dropped a comet on the map.

Are Epic in danger of ruining Fortnite?

Every game of Fortnite Battle Royale starts with the same decision: “where are we dropping?” For most of Fortnite’s life, the choice has been easy. Western areas like Shifty Shafts, Pleasant Park, and Greasy Grove all provide tonnes of loot opportunities and cover. There’s also ample high ground, making for matches where your decision to take a hill is just as important as your ability to hold it.

By contrast, the Eastern side of the map often felt like something of a dead zone. There are the same number of named locations – nine on each side of the map – but the disparity in what they have to offer is enormous. The entire Eastern coast is taken up by Wailing Woods, Lonely Lodge, and Moisty Mire; locations that are heavy on building materials, but otherwise difficult to traverse and light on weapons – you know, the things you actually need to win the game. The East’s other locations are typically smaller than those in the West, and those towering hills I mentioned earlier make way for rolling fields, where players are easy prey for opportunistic snipers.

Everything changed when the comet landed. It crushed Dusty Depot, leaving a smouldering crater, and threw up a handful of new locations – Risky Reels, which fills some of the gap on the previously empty North-East coast; a mansion south of Lonely Lodge provides plenty of loot and materials; and Moisty Mire now has a film set at its centre, offering more loot and making the entire swamp easier to move around. 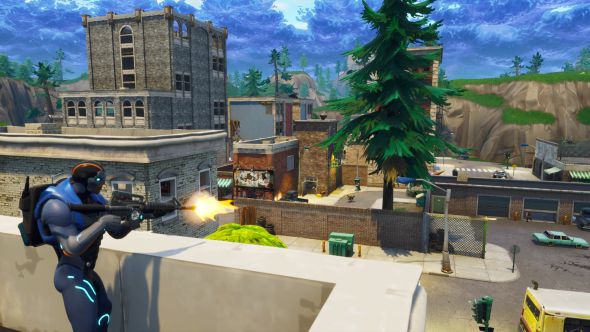 On top of that, the craters, both those at the new Dusty Divot and the others dotted around the map, now offer ‘Hop Rocks’. These consumable items offer a temporary anti-gravity boost when you pick them up – great for low-gravity shotgun duels – letting you cover an enormous amount of ground quickly. They only last for 30 seconds or so, but if you use them right, you can jet across the deadly open fields to safety far more quickly (and elusively) than before.

Dusty Divot isn’t just there to provide high-altitude thrills. Its placement on the map is crucial, filling a gap between Tomato Town, Retail Row, and Salty Springs. In the mid-game, it occupies a similar role to Tilted Towers’ draw for those who dropped at Greasy Grove, Shifty Shafts, or Pleasant Park. In the single day since its arrival, players have lingered in the new area well into each match. Only time will tell whether or not that comes down to novelty, of course, but the potential advantage and high-speed gunplay offered by Divot’s rich seams of Hop Rocks could offer an alternative ‘must-drop’ location on the Eastern side of the map, at least partially cancelling out the inevitable pull of the West.

The season four changes don’t solve all of the map’s issues, and will have little impact on the late game. But that’s not what they were intended to do. Instead, they’re a smart attempt to improve the early- and mid-games. They offer a more consistent spread of places to land without worrying that you’ll spend your entire game sprinting to the refuge of the safe zone, as well as a set of new experiences for the game. If Dusty Divot retains its current popularity, Fortnite’s season four changes could prove an enormous low-gravity leap forward.