Remarkably, the online shooter plays rather well on its new platform. A hundred players battle it out on the same futuristic map until there is only one winner. However, it is far from a perfect replica, and making the transition from PC to iOS has not been easy on us.

Obviously, the graphics have taken a slight hit to run on iOS. The difference is striking at first, with the port looking similar to earlier versions of the PC game, but the visual downgrade is easily overlooked once you get caught up in the crossfire. Any action, whether it be jumping, aiming, or rotating camera, is controlled by touching the screen. As you can imagine, your thumbs regularly get in the way by partially obscuring your field of view. In a game that constantly requires being on the lookout this leads to a big disadvantage when going up against players on console or PC.

That said, the layout of the interface works well, and despite some subtle repositioning everything feels intuitive (a backpack icon has also been introduced, which is particularly helpful given that, despite hours of searching, we couldn’t find the Tab key on our phone) and has enough space on the smaller screen so that you don’t accidentally hit the wrong button. There is one glaring issue, though. On PC, both cycling through your weapons and constructing buildings is fluid and easy. But navigating the bottom bar on iOS requires time and precision, both of which may be in short supply during multiple shootouts. 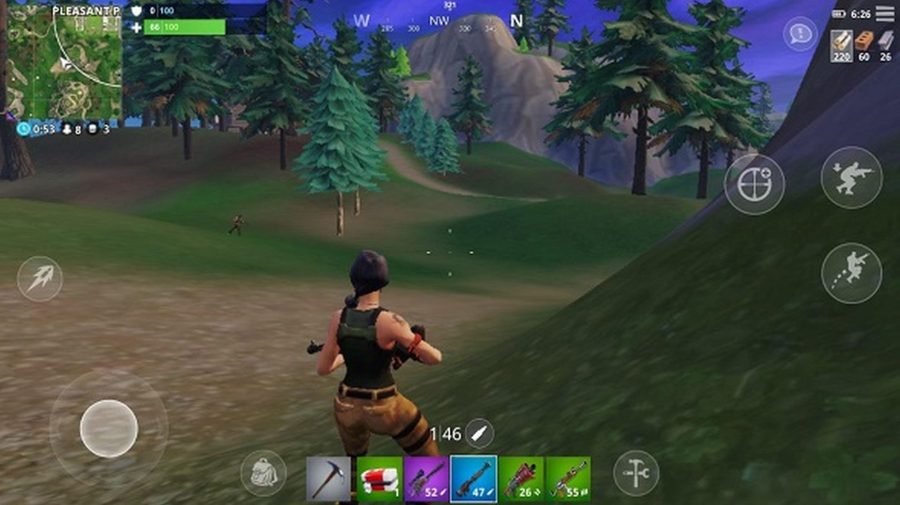 Despite these shortcomings, I did manage to get a handful of kills I would be proud of, even if I was playing on PC. Sniping has been made simpler with the move touchscreen, as instead of holding a button to stay zoomed in you can tap the screen once to look down your scope, focusing all your attention on the enemy in your crosshairs.

The aim-assist is much more noticeable in the iOS version than in its PC counterpart. This is a welcome addition as a full 180-degree rotation requires a number of swipes across the screen – the sensitivity can be adjusted in the settings once you get the feel of things, however.

Further assistance for mobile players comes in visual cues: gold boxes, footsteps, and incoming fire are all indicated with a small symbol on your screen, which changes position based on the relative direction of your character. This is very helpful when you forget your headphones, but takes away an important part of the experience, as some of the tension is negated when you know exactly where an unseen enemy is approaching from.

Despite running on a phone, the chat system in Fortnite’s iOS version is primitive compared to PC. As it stands, you cannot hear other players or even transmit audio yourself – not a problem for solo games, but teamwork is harder to pull off with friends due to the communication issues. Maybe you could have a PC running in the background with Discord open? These are only surface issues, though, and Epic promise to finesse the package with regular updates.

Broadly speaking, Epic really has pulled it off. At times, the iOS version of Fortnite is clunky and awkward, but that is to be expected from a skill-based PC game crammed into a mobile. In the future, the interface will be tweaked and with it players will become more skilled. We now have a hugely popular online shooter that is tense, exciting, rewarding, and free, and able to work well on a phone-sized screen.

Fortnite on PC will always be the superior option, but playing on iOS can be just as enjoyable, and means you don’t have to stop playing when you’re away from your computer (though, y’know, no Discord…). What better way to secure a Victory Royale on the go? (Sorry, Switch fans).