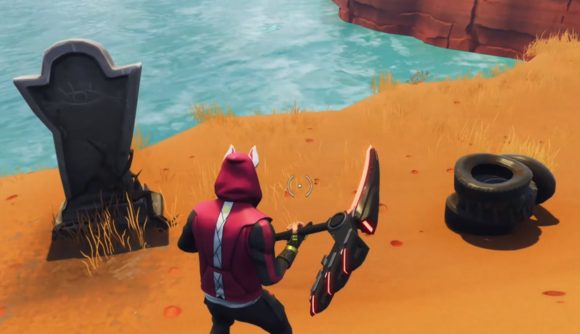 Fortnite YouTuber Muselk delighted us all last week with an elaborate rescue attempt that went as wrong as it possibly could. It was an emotional rollercoaster, it drew attention from Epic, and now it’s been fully memorialized in-game.

If you’ve missed the clip, you can see it below, but here’s a summary. Muselk finds a fellow player seemingly trapped at the bottom of a cliff on the edge of the map, seemingly without the materials necessary to build an escape. So our intrepid hero builds a staircase all the way down, only to find that the other player – known by the delightfully silly name of Chappadoodle – sits below the build limit, so the stairs can’t reach.

Muselk has a flash of inspiration – if he drives a golf cart over the edge, Chappadoodle can bounce off the roof onto the stairs and escape his obscure prison. So Muselk drives his cart over the edge, tumbling down the newly-built stairs – and smashes directly into Chappadoodle, sending the trapped player careening to his doom.

For his part, Chappadoodle says on Reddit that he panicked, thinking Muselk was going to tumble over the edge himself in the rescue attempt, so he threw himself in harm’s way to protect his own saviour – though it didn’t quite work out that way.

Watch as @MrMuselk attempts to rescue a fellow player.

But now, since Fortnite patch 5.1, there’s a memorial to both would-be heroes on that cliff. A gravestone on one side, and a pile of tires on the other. The former memorializes Chappadoodle’s tragic death, while the latter makes sure no other player will ever be stuck there again.

HOLY CRAP! @FortniteGame Added a tribute to my "greatest rescue ever" clip!
Chaperdoodle will not be forgotten! (the tires to help him jump up aswell 😂) pic.twitter.com/z30UedYSQf

The greatest outcome we could’ve hoped for.