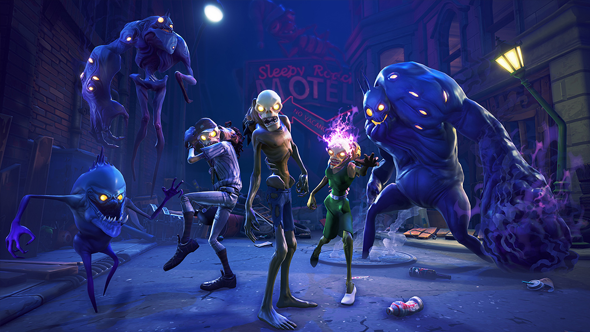 As Rob succinctly put it in his preview back in 2014, Fortnite is “a combination of Orcs Must Die and Gears of War.” Epic Games’ co-op shooter has you first build a fort littered with traps and then defend it from waves of encroaching undead.

Fortnite finally came out this week after a five-year development period. Matt, Jeremy, and Jules dived in to see if, after all this time, it passes muster – and if it can break the curse of its genre.

If playing with friends is your thing, here’s the best co-op games on PC.

Jeremy: Alright boys, we’ve now played Fortnite for upwards of 60 minutes and are thus in a position to judge it in its 50-hour-plus entirety. What do you think of it?

Matt: I think saying it’s a 50-hour game is already madness. Fortnite is clearly designed for a lifetime of play, akin to games like League of Legends. Have you seen the skill tree? I doubt I’ll be a quarter way through it by December!

Julian: Have we seen the skill tree? Which one? There are so many and they sprawl all over the place. Honestly, they left me a little overwhelmed – there are squads, hero cards, survivor cards, crafting, items, multiple skill trees, llamas.

I’m still super early in the game, but I had a scan through the skills on offer and there was a frustrating number of invisible buffs – +10% more damage to ranged weapons, +5% health, faster build speed, and so on. I feel like it’s not really in the spirit of a game that’s about building chunky fortresses and fighting off hordes of the undead. 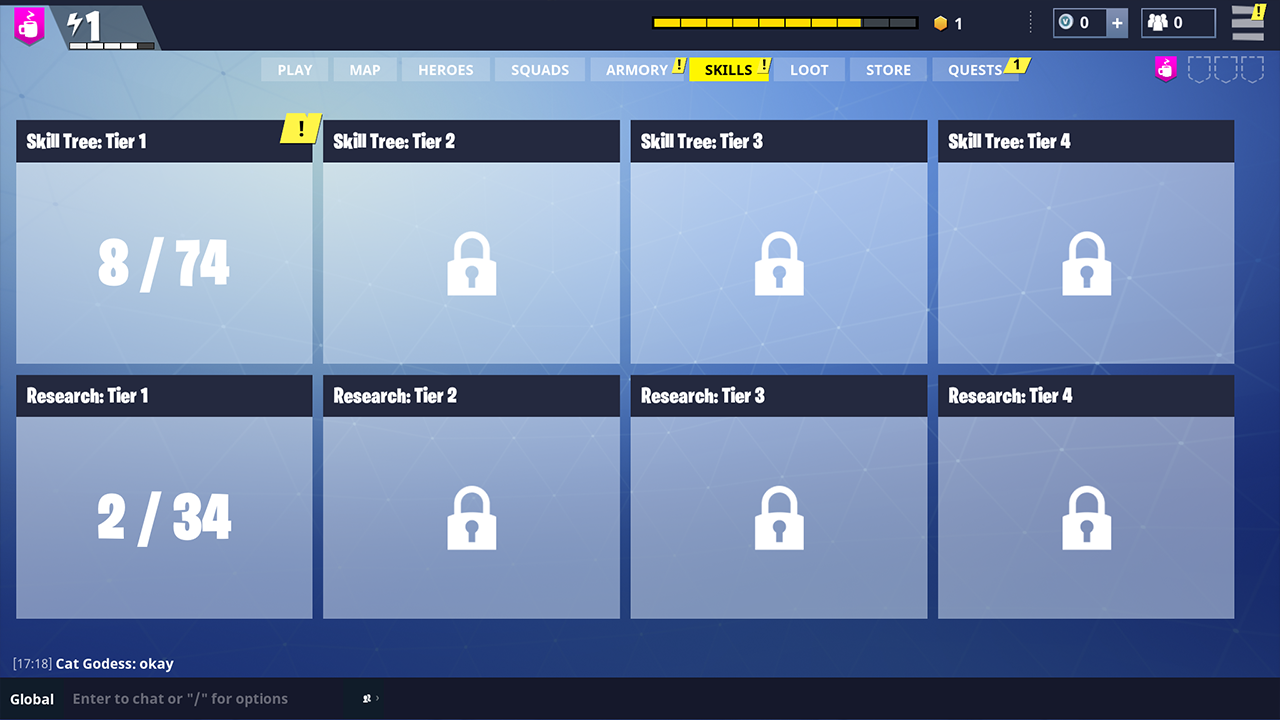 Jeremy: I’m also not sure I’ve seen the skill tree yet. I’m still fighting my way through the climbing skill vines that cling to its trunk. I mean, I do get it – Fortnite’s in paid early access now, but it’s intended to be a free-to-play service game that lives forever. These systems are there to support the people who’ll be here for years, not Joe Journo on his lunch break. But do they ever seem at odds with the spirit of the game proper – which, we should mention early, is brilliantly breezy fun.

Matt: You two are also puny level one characters, unlike me: a mighty level nine. Trust me, you’ve not seen the end of the tutorial yet. The game gradually introduces these many, many concepts over time, as and when they become important. It’s not as bad as it first seems.

But, like Jeremy says, the core game – the stuff where you’re in a map smashing up everything in sight and rebuilding it – is an absolute joy. Personally, I feel it captures the best parts of Minecraft in its construction elements: hit things until they break, then put them together in very simple patterns to create something that can actually look extraordinary. I’ve been using the building tools to sculpt beautiful sniper towers, surrounded by winding staircases with wooden bannisters. Unlike you two, of course, who haven’t seemed to apply any finesse to your structures.

Jeremy: Listen, nothing says finesse like a long wall that crudely spells out the word ‘finesse’ in huge wooden boards.

Jules: This is about the staircases to my sniper tower, isn’t it? Some of us like wide ramps to our towers, Matt. We don’t all need narrow staircases fringed with low walls and handrails. This is about building a fortress, not a woodland lodge.

Jeremy: I want to chop the skill tree down, like I have everything else that’s fallen across my path in Fortnite. The way the game paints a moving target on rocks and cars as you hack at them, introducing a little twitch accuracy to the business of gathering materials – I’m almost annoyed by how compulsively that tickles my lab rat brain. And that cartoon buoyancy extends throughout the game, from the way bricks float into place to complete staircases even as you step onto them, to the combat, which has none of the Saving Private Ryan earthiness of Gears of War. What did you twos think of the fighting? 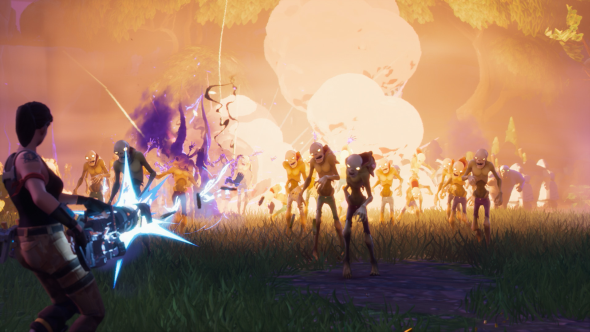 Jules: Bits of it I really like, like the way body shots and headshots are signposted. Every hit has a punchy orange flicker, like the lights on a pub quiz machine. There were moments I was unloading pistol clips into a horde descending on our fort and grinning as the crowd thinned in orange and purple flashes.

I was a bit disappointed by the lack of enemy types, though. We only came across four: the basic shuffler, a baseball-hat-wearing undead who threw bones at us, a chubby zombie with a big health pool, and an enemy that would throw her own head as a grenade. They were fine and fun but I wanted some massive monsters to force us to prioritise our defense. Is this something we get later in the game, Matt?

Matt: Yeah, this is all because you’re teeny tiny noobs. Like with every element in Fortnite, new enemies are drip fed into the system. I ushered you into a level five arena, which has around five enemy types (sounds like you didn’t spot the heavy chap who chucks propane gas cylinders). The more progress you make, the nastier the husks you’ll have to deal with, including a zombie with a beehive for a head, and a hefty blue blob monster thing. 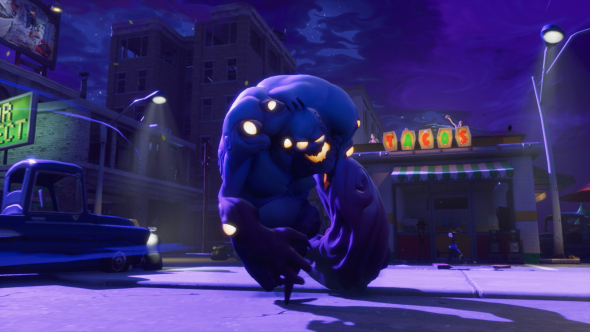 We spent most of our mission turning zombies into ash via the use of chunky firearms and swooshy swords, but we also got to lay down a bunch of traps. I’d guess that the devs likely played Orcs Must Die!, as they’re not short on similarities: spike traps, tesla coils, tubes that pump out torrents of poison gas. They’re certainly not short on wacky, violent fun. Did you guys enjoy building the fort to try and entrap the hordes?

Jules: I preferred our second fort. The first was fun to build but the waves were so easy (we were on a very low level, after all) that I don’t think it was really put to the test. The second fort we actually designed with some purpose, leading the swarm into a network of tunnels where we could cluster them together for easy fighting. I felt I ran out of traps to lay /really/ quickly, though.

Jeremy: That’s something I found too. I’m looking forward to building resource-expensive chicanery in the mould of Orcs Must Die!, and working out how far it’s possible to trick those zombs into what are essentially tower defence gauntlets. But although resources are persistent between maps, I felt like I didn’t have enough to bring my Edgar Allan Poe torture room ambitions to fruition yet. Does that change as you jump from map to map, Matt? 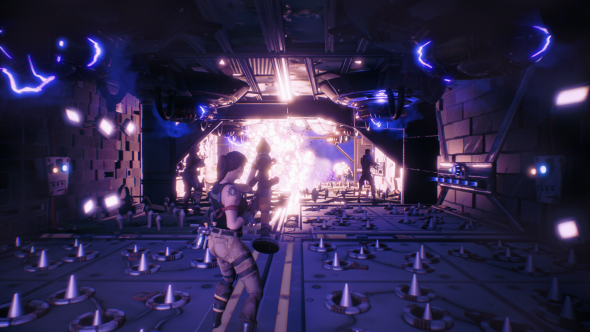 Matt: The maps are procedural, so change every time, but there are several environmental styles. The urban maps are great for gathering metal and fiddly things like nuts and bolts, while the forest maps are bounties of wood and twine. So long as you treat every quest as a massive mining operation as well as a construction party, you’ll eventually have an inventory of resources deep enough to make something truly awe inspiring. There’s no denying that traps are the most expensive thing to craft, though. And, unlike guns, which can be used over and over until they break, when you’ve made and placed a trap there’s no going back.

Still, why cry over a trap that was placed and never triggered when you can just build a fresh one based on the new schematic you just found in a llama?

Jules: Yes. Llamas. Matt, I think you best explain as you’ve such a love for them. 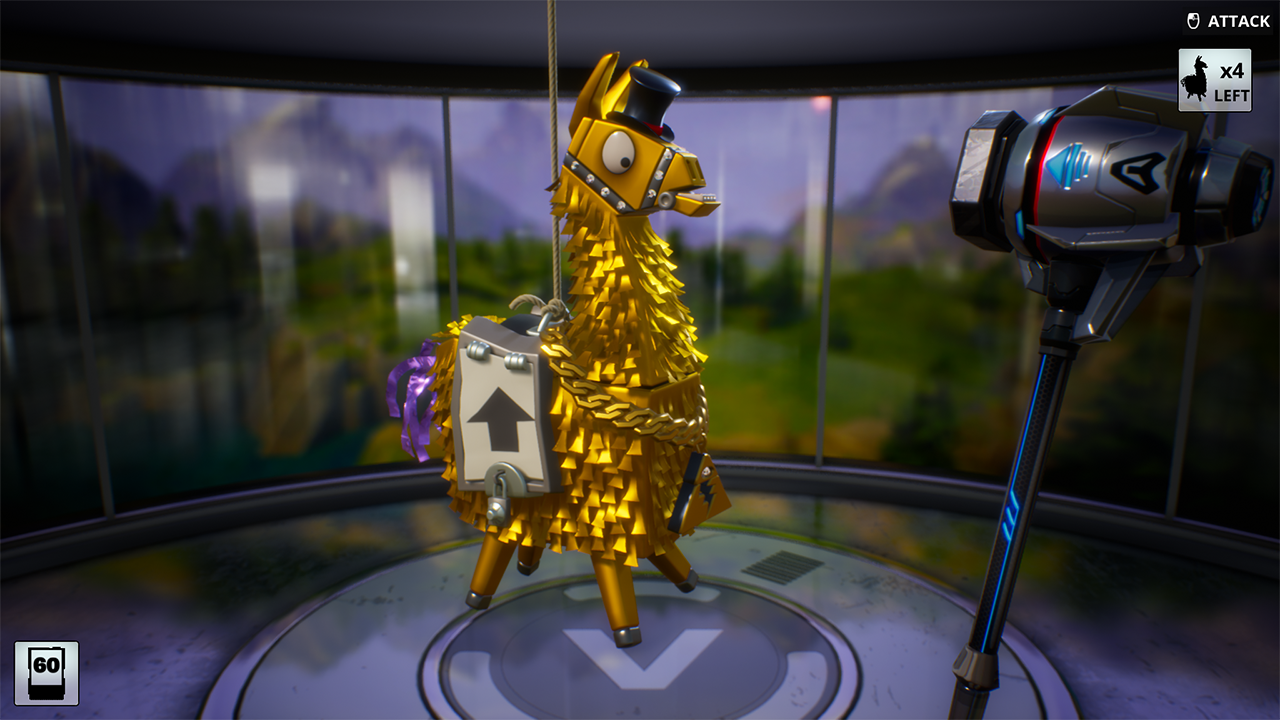 Matt: They’re just loot boxes, but they’re the best kind of loot box. You buy them with the earned in-game currency, and they contain a plethora of items, XP bundles, and characters. But the joy comes in their design: they’re llama pinatas that you have to smash to get the goodies. And, sometimes, when you hit them they re-roll as a silver or even a gold llama, with even better gear inside. It’s all very exciting, and I especially like the animation where a broom comes and sweeps up all the scattered, uneaten candy. Who wants sweets when I found an epic sniper rifle?

Jeremy: Matt Purslow the llama farmer. Maybe that’s what we’ll come to call all great Fortnite players, after many thousands of hours of compulsive tree-thwacking. Do we think Fortnite can be the perpetual co-op game Epic would clearly like it to be?

Jules: It’s not hooked me yet, whereas Orcs Must Die! had me firmly in its claws at this point. Though I do want to play again. Maybe by level ten…

Matt: I really like it. I imagine its progression systems will be hacked apart and rebuilt by the time version 1.0 comes around, but I think it’s got the makings of a great weekend regular.

Jules: If only there was some sort of guide that could explain all these various systems and heroes…