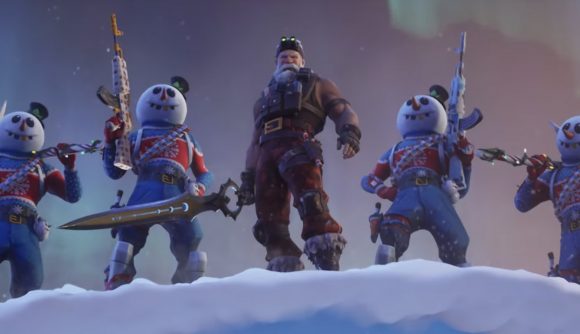 Last I checked, there were several months of winter left, but Fortnite appears to be ignoring my meteorological musings. Its icy biome only arrived earlier this month, but it’s already melting, revealing more of the castle hidden beneath Polar Peak.

As discovered by Dot Esports, the Ice King’s castle, once entirely covered by snow, is being gradually uncovered as we approach Christmas. Today’s update saw the castle’s throne room thaw out, showing off an ominously-lit hall complete with a pointed throne lurking at one end.

There’s nothing particularly special about the room at the moment, although there’s a reasonable amount of loot on offer at various points, and a few other areas have also thawed out today. Plenty of the castle is still encased in the ice, however, so expect more and more to become available over the next two weeks. The battle royale’s Christmas event, 14 Days of Fortnite, begins tomorrow, and will see plenty of limited-time modes make their way back to the game ahead of December 25.

Polar Peak has quickly become one of Fortnite’s most infamous locations, thanks primarily to the Infinity Blade it once housed. The drastically-overpowered melee weapon was added to the game two weeks ago, but was quickly vaulted after wreaking havoc in a recent tournament.

Elsewhere, Fortnite developer Epic Games is being sued by The Fresh Prince of Bel-Air’s Alfonso Ribeiro over their use of his signature dance-move, the Carlton. Ribeiro is thought to have followed suit after rapper 2 Milly filed his own claim against the company a few weeks ago. The suits may pave the way for several other creators to seek compensation from Epic.