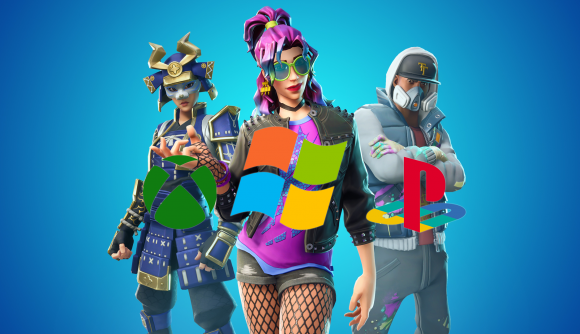 Sony has finally admitted defeat and will begin trialling cross platform play between players on PlayStation, PC, and other consoles. Previously, PC and PS4 players could play together but and PC and Xbox players could play together, but not all at the same time. This true cross platform play is going to kick off with an beta of Fortnite that will allow players on PS4, PC, Xbox One, Switch, Mac, Android, and iOS all play together in battle royale harmony.

There’s no waiting around either, the open beta begins today, so expect to start seeing strange people appearing in your Fortnite games talking about gods of war and gears of war. Treat them well, they’re new here and don’t know what it’s like to battle with the children of mice and keyboards.

“For 24 years, we have strived to deliver the best gaming experience to our fans by providing a uniquely PlayStation perspective,” John Kodera President and Global CEO, Sony Interactive Entertainment, writes in the blog post announcing the open beta. “Today, the communities around some games have evolved to the point where cross-platform experiences add significant value to players. In recognition of this, we have completed a thorough analysis of the business mechanics required to ensure that the PlayStation experience for our users remains intact today, and in the future, as we look to open up the platform.”

This is a pretty huge moment in gaming history – every major platform now supports cross platform play. This isn’t the end to console exclusives or anything quite so vast but this could mean a huge shared pool of players for multiplayer games, meaning we won’t quite so frequently end up with empty servers on PC while the same game flourishes on another platform.