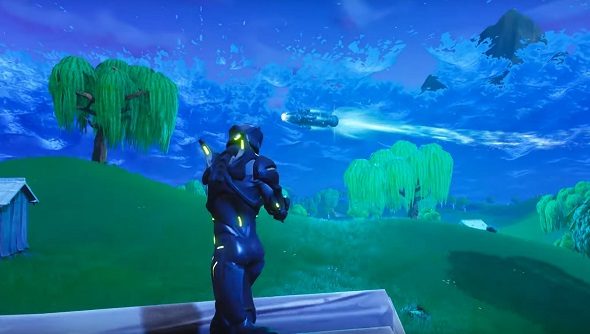 The countdown finally reached zero, and the rocket that’s been patiently waiting in Fortnite’s enemy lair launched yesterday at 13:30 EST. Players gathered to watch, and for a moment, it looked like a scene from Cape Canaveral, where shuttles would blast off on orbital missions.

The launch was visible from most of the island, but it was also broadcast on in-game television screens, reinforcing that connection to Moonshot and giving the event a certain gravitas. The rocket climbed into the night sky, and the gathered players (generally) looked on peacefully.

But then things got strange. The rocket’s first stage burned out its fuel and detached, tumbling back to Earth (or wherever Fortnite is supposed to take place) and landing somewhere in Anarchy Acres. After a moment’s pause, the second stage ignited, and the rocket resumed its ascent, moving faster until it finally disappeared out of sight, leaving only a contrail.

Fortnite is the only one with hyperspace rockets, but which battle royale is the best?

The rocket – or something like it – then appeared to fall back to terra firma, its nose pointed at the ground as four laser beams focused in on Tilted Towers. Once all four had lined up, the rocket’s third engine stage ignited and it hurtled toward its target – only to disappear into a shimmering crack in reality itself.

Another crack opened, this time over Moisty Mires, and the rocket emerged, flying horizontally across the landscape and again disappearing into a crack in the fabric of reality. Another crack opened near Loot Lake, and the rocket burst through at high speed, this time headed upwards. It hurtled back into the night sky, only to disappear again as it smashed a massive crack in… reality itself, apparently.

That final crack is still visible today, stretching across Fortnight’s sky a bit above the cruising altitude of the Battle Bus.

The one-time event seems to have been a success – while queue times were reportedly a bit longer than usual, Epic’s servers seemed to hold up against the influx of spectators, and top Fortnite streamer Ninja had half a million viewers watching for the launch itself.

What it all means is anyone’s guess at this point. But the sci-fi movie theme of Season 4 seems to have shifted up a few gears.