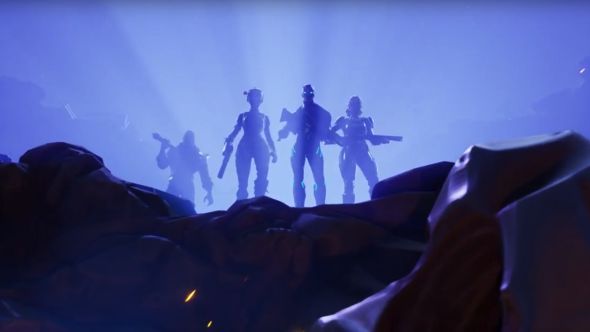 Fortnite season 4 begins, well, any minute really. But while the servers are offline, you can take a look at the leaked trailer.

Here’s everything you need to know about Fortnite season 4.

The trailer, which heralds the arrival of season 4 (and you can watch at the top of this article), opens to a standard 50s B-movie aesthetic, showing a flying saucer circling the earth. The shot then pans away, showing a character wearing the Rust Lord skin viewing the movie within a drive-in movie theatre. It’s then that the meteors start falling, peppering the poor unsuspecting Rust Lord with space rock.

And it’s not just Rust Lord, as rocks go on to hit the motel, as well as seeming to spread across the rest of the island. There’s also a particularly good clip in which two characters wearing the dinosaur skins panic in the face of the meteor shockwave.

The trailer ends on a shot of a squad of characters walking out over an impact crater, looking down at the meteor within it, which suddenly begins to glow ominously. I’d guess that’s part of a new game mode – Impact was datamined a few weeks ago, and this seems the perfect time to introduce it.

As I mentioned earlier in this article, Fortnite’s servers are still down at time of writing, but you can pre-load the season four update. We’ll be updating throughout the day with whatever we find when we can actually get into the game, so make sure to check back.