Someone has been hanging around near the Durr Burger handing out phone numbers, and llamas are invading cities all over the world.

Yes, that’s a ludicrous sentence, and although Fortnite is involved both of those things are happening in real life. It’s all part of an ambitious, cross-dimensional ARG that will almost certainly climax with the launch of Fortnite season five.

If you missed the news, Fortnite’s Durr Burger – a fast food mascot – was sucked into one of the rifts that have been appearing in the game over the last week or two. Shortly thereafter, it appeared in real life in the middle of a desert in California. Fans then shared its coordinates online, which led many to pay a visit.

Looking for an alternative in the run-up to season five? Check out the best battle royale games on PC.

Redditor boiqqq was one such visitor, and yesterday he was joined at the site by a mysterious man whom he names Agent #3678. He posted a video, in which the agent claims to be investigating the “anomaly” and hands out cards to people who look like they “know something”. The agent then returns to his “measurements” and denies any knowledge of  Fortnite Season 5.

Those cards bear a phone number, which offers only static when dialled (as seen in this video from PC Gamer). This was later changed to this clip of apparently equally nonsensical audio,but spectogram analysis decoded it into this message. Another audio file has been found only today, which decodes into another hidden message – these are a set of coordinates in Paris, France.

You can keep up with all the drama on this Reddit megathread tracking the ARG – doubtless it will be updated when someone heads to those coordinates and discovers whatever is there to be found. The Durr Burger wasn’t the only object to get sucked into a rift – perhaps the Tomato Town tower or Lonely Lodge have appeared in Paris? 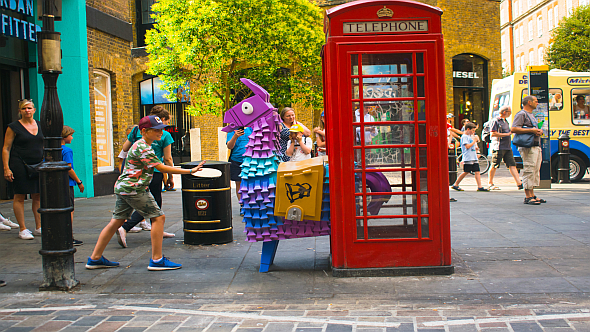 Elsewhere, Reddit users have spotted Fortnite supply llamas appearing in several major cities. At least six have been recorded at time of writing, inBarcelona,Cologne, Paris, Cannes, Warsaw,andLondon, where it isemerging from a red phone box (shame on those who think this suggests a crossover with Doctor Who, who of course flies a TARDIS permanently disguised as ablue police box – totally different thing -due to a glitch in its chameleon circuit).

With season five due this coming Thursday, expect the ARG to unfold quickly. We’ll keep you updated.