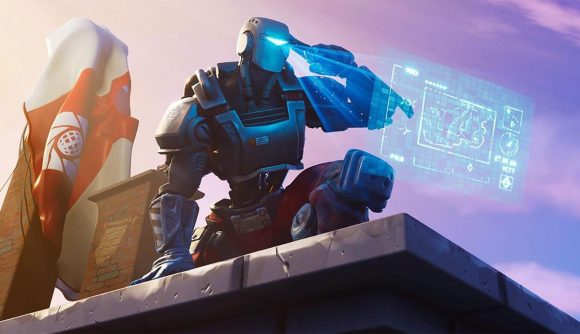 A snowstorm has been rolling toward the Fortnite for the past week, and as with nearly every event in Epic’s battle royale, that time’s been filled with bizarre hints, teases, and previews of what to expect in the next season. And it all keeps coming back to a mysterious robot skin that appeared as part of the latest battle pass.

If you completed seven of this season’s weekly Hunting Party challenges, you got A.I.M., a robot skin. Since week seven – the first time you could acquire the skin – the bot’s been appearing in all the weekly loading screens. First he was front and center in week eight’s loading screen, but he’s been quietly stalking in the background of the screens for week nine and ten.

But it gets weirder from there. A snowstorm has appeared on the horizon of the Fortnite map, and there’s a sound that plays as you look at the approaching cloud As Fortnite Intel notes, a player on Reddit ran that sound through a spectrogram. In the middle of the visualised version of the audio, there’s a representation of A.I.M.’s logo, far too big and obvious to be a coincidence.

Week ten of Fortnite’s sixth season is scheduled to begin tomorrow, bringing a close to this event’s drama around Kevin and the cube monsters, as well as the peaceful period that’s followed. If you still need to fill out your battle pass, we can help – check out our guide to Fortnite Carnival Clown Board locations.

Exactly what season seven will bring remains unclear, but it’ll involve some combination of snowstorms and mysterious A.I.M. machinations.