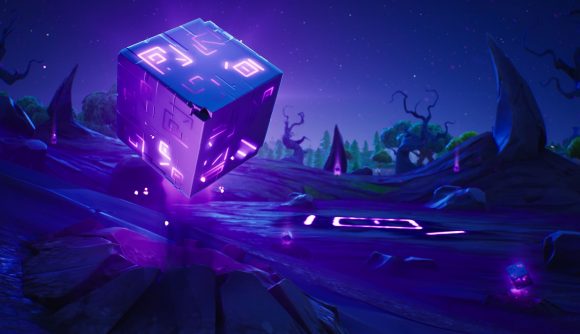 September 28, 2018 Fortnite’s Shadow Stones are back, but Port-a-Forts have been sacrificed in their place.

Shadow Stones appeared with the start of Fortnite Season 6, but were soon disabled following a series of bugs around the new item. Now they’re back, but Port-a-Forts are gone. The two things are apparently unrelated, but I sense the Law of Equivalent Exchange at work.

“We have temporarily removed the Port-a-Fortress to address degraded performance,” Epic says “Shadow Stones have returned to Battle Royale! Drop in now and sneak up on the competition.”

The runes that Kevin the Cube printed in various locations across the map are now surrounded by corrupted ground instead of anti-gravity domes. Shadow Stones spawn in those spots.

Using a Shadow Stone will send you into ‘Shadow Form’ for a short time. While you’re in Shadow Form, you’ll be invisible when stationary, but unable to use your weapons. When you move, you’ll still be hard to see, but enemies will be able to follow a Shadow Trail.

Shadow Stones offer increased movespeed, and let you jump further without taking fall damage. You also get a special ‘Phase’ ability, allowing you to boost forward, passing through objects as you travel. Shadow Form usually lasts for 45 seconds, but you can get out of it early by aiming down your sights.

Players have reported a number of unintended ‘features’ after Shadow Stones went live including the ability to phase into closed trucks. More seriously, there’s a way to keep access to guns while invisibility is active, allowing you to kill other players without ever being seen. Hopefully those are all worked out now.

We have temporarily removed the Port-a-Fortress to address degraded performance.

Shadow Stones have returned to Battle Royale! Drop in now and sneak up on the competition.

For more details on what’s new, you should check out the Fortnite patch notes 6.0 for a run down of everything that arrived in the latest update. Most of it remains in the game for now.