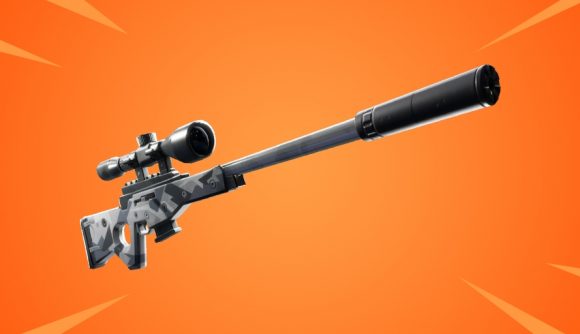 A new Fortnite weapon is on its way to battle royale. This time, you’ll be able to instill fear into the hearts of your enemies by taking pot-shots without ever revealing your location, thanks to the upcoming Suppressed Sniper Rifle.

The new rifle was discovered over the weekend by Fortnite dataminer Lucas7Yoshi, who posted their findings to Twitter and was later confirmed via the in-game News page. The new weapon is pretty similar to the pre-existing bolt-action sniper rifle, but while sniper shots have previously rung out across the map, alerting enemy players to your location, the new weapon comes with a silencer to help keep you hidden.

To retain some semblance of balance, the new rifle won’t do quite as much damage as its older brother. The Epic variation will deal 100 damage, while the Legendary version will deal 105. It will potentially still be able to see enemy players off in one shot, however, as Lucas7yoshi notes that it’s possible that there may be a 2.5x headshot multiplier.

The weapon currently exists as ‘Frostbite’ in Fortnite’s Save the World mode, which explains the artic-ops style paint job it comes with.

Read more: Fortnite’s Grabber can boot enemies to their deaths

We don’t know exactly when the new rifle will be available but, I’d imagine it’ll show up before the end of the snowy Season 7, possibly in the next update due for Tuesday, January 8. However, weapons on the news page have been known to drop the next day, so let’s keep our fingers crossed tonight.

While the battle royale itself might have settled in for the winter, the community is already looking ahead to sunnier times – the Australian Open is set to host a $500,000 Fortnite competition later this month. The competition will take place alongside one of tennis’ biggest tournaments, beginning on Saturday, January 26.