It’s tough to see in most places, but Fortnite players have spotted sand trickling out of the giant crack in the sky. You can see it while you’re heading in on the Battle Bus, or by looking up in the new desert region in the Southeast section of the map.

Sand leaking out of the sky is a bit disconcerting, and it raises a couple interesting questions about Fortnite’s Season 5 and what’s going to be happening during this ‘Worlds Collide’ themed event. Is there a desert sitting above the sky somewhere, and if so, what kind?

In a thread posted to r/FortNiteBR, some players seem convinced this is an indication of a pyramid on its way to Fortnite. Perhaps it’ll eventually break through the cracked sky and land in the new desert area.

Here’s our list of the very best battle royale games on PC.

Another possibility is that there’s some kind of Wild West-themed nonsense up there, waiting to break through. That would certainly explain the presence of abandoned stagecoaches around the island.

Nobody’s sure exactly what it means yet, but it’s sure to indicate something. If nothing else, it does explain how Moisty Mires has been turned into a sun-drenched desert. And that’s just one of the big map changes that’s arrived along with Season 5. 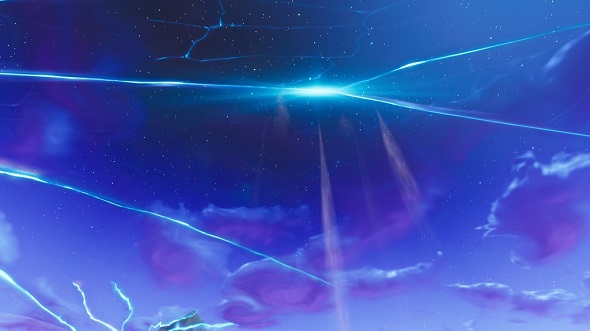 Season 5 has also come with a new style of challenges called Road Trip challenges, which unlock once you’ve completed all the weekly challenges. As more of these are unlocked, they’ll likely shed more light on what’s going on with the sand leaking out of the sky.