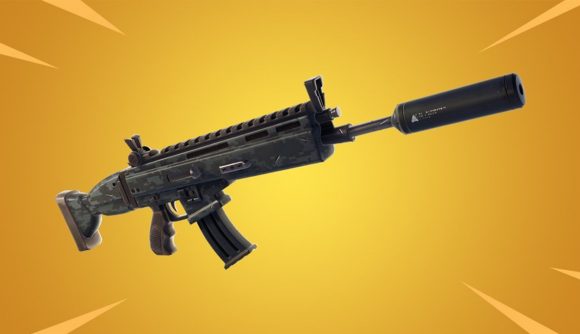 Fortnite is getting another new weapon in its next update with the Suppressed Assault Rifle. The name pretty much tells you the basics – it’s an assault rifle equipped with a silencer. It’s popped up on the in-game news feed, which means we can probably expect it as part of the next patch. That’s v5.50, due out this week.

The Suppressed Assault Rifle is officially described as a “silenced weapon that rewards precision aiming.” It looks very much like the existing SCAR-style assault rifle, except with the obvious addition of a silencer to keep your shots quiet for a more stealthy type of engagement.

This weapon was datamined a few patches ago, and thanks to the folks at Storm Shield One we have some more detail on what to expect. It offers burst fire and impressive accuracy, though it quickly drains out your ammo reserves. It comes in Epic and Legendary variations, with 32 or 33 damage depending on which you pick up. That’s all unofficial until Fortnite update 5.4 actually drops, but should give you a solid idea of what to expect.

Given the weapon’s visual similarity to the existing rifle, some fans are speculating this is just another Fortnite skin, but given the method of announcement and the existence of a new weapon in the game files, that seems unlikely.

While you’re waiting for the new weapon to drop, you may be looking to finish up the Fortnite Road Trip week 9 challenge – you can find a handy guide on how to do so at that link.