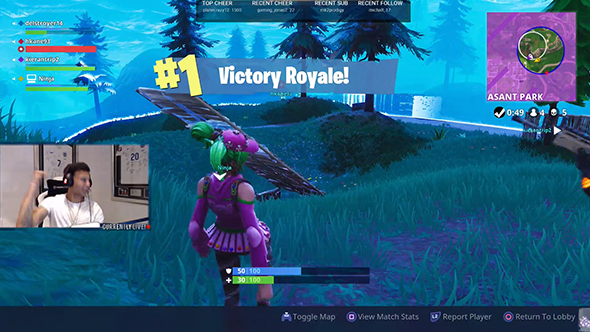 Fortnite has well and truly taken over the world, with millions playing at any given time and significant celebrities publically getting in on the action. Dele Alli of Tottenham Hotspur has been bringing Fortnite charm to the football crowd with regular goal celebrations inspired by in-game emotes, and members of the team have joined top streamer Ninja for a full squad session.

Here’s everything you need to know about Fortnite season 4’s battle pass, challenges, skins, and map.

Dele Alli, Harry Kane, and Kieran Trippier all joined Ninja’s stream yesterday, and showed off some solid skill, picking up a Victory Royale during their time playing together. You can see the full day-long stream here, or check out the highlights in the video above.

It wasn’t quite the cultural moment that Ninja and Drake created a few months ago, though as GameRevolution note they did draw viewers in the hundreds of thousands. It seems Kane let slip that he – and most other football players – tend to prefer Fortnite on consoles rather than PC. (I suppose we can forgive that. For now, at least.)

You can also find Dele Alli streaming with some regularity on on his own, including some time with other Tottenham players including Kane. You can also see his side of the stream with Ninja here. With everybody playing Fortnite these days, I don’t think we can be truly surprised by another celebrity crossover – though I’m sure I’ll be proven wrong within the next 48 hours.