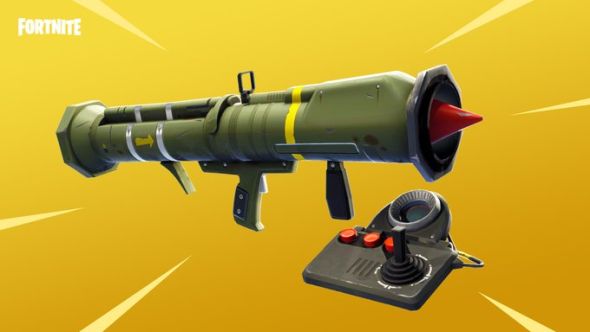 Update, April 17: Fortnite’s guided missiles are going away due to power concerns.

Fortnite added guided missiles in the 3.4 update a few weeks ago. They proved a fun addition to the game, from the obvious uses to more surprising ones like rocket riding. But it turns out all that fun stuff made those missiles a bit game-breaking, and the weapon’s taking an extended leave of absence from the game.

Stay up to date with our Fortnite upate tracker.

Epic have confirmed that the guided missile will be going “into the vault” while they reassess the weapon’s place in the game.

“We’ve gotten a lot of feedback around the Guided Missile,” Epic say, “in particular concerns over fairness and strength of the weapon. We share your concerns, so we’ve put the Guided Missile into the vault while we figure out the next steps for its future.”

Update, March 29:Those guided missiles that just got added to Fortnite? You can ride them.

Fortnite’s 3.4 update went live earlier today, and the biggest addition is guided missiles in battle royale. As you might expect, it’s a missile that you get full control over. What you might not expect is that you can also ride that missile.

You’re locked in position while guiding the missile, so it might not be the most practical method of travel – unless you have a steady-handed teammate. Streamers Ninja and DrLupo demonstrated just that earlier today, and the results were very impressive.

Yes, they just won a Victory Royale by riding a guided missile into a group of enemies. And I thought the end of Just Cause 2 was ridiculous.

The headline act is the introduction of the guided missile to battle royale. The new weapon, which you can get from crates and supply drops, allows you to steer a rocket directly at your enemies. The downside of this, however, is that you have to stand still while you steer, opening yourself up to plenty of potential danger.

The update also changes the rarity colours of the game’s shotguns to “more closely represent their effectiveness.” That means that while no damage figures have changed, Pump Shotguns are now only available in Green and Blue variants (rather than Grey and Green,) while Tactical Shotguns are now Grey, Green, and Blue, rather than Green, Blue, and Purple.

V3.4 also sees the return of the Sniper Shootout Limited Time Mode, adding the Hunting Rifle and Crossbow but removing the Revolver. Drop rates on Launch Pads have been increased by 25%.

Save the World gets a new Easter-themed questline – The Three Husketeers – as well as the very cleverly-named Miss Bunny Penny costume as a reward. Elsewhere, you can celebrate Easter by blowing up your enemies with the Egg Launcher, a temporary cosmetic change to the Grenade Launcher.

Update 3.4 is quite large, so the normal server downtime had to be extended to fit everything in. Epic tweeted around an hour ago at time of writing to say that servers were now back up, although there have been some issues with xp and rewards in Sniper Shootout and Save the World. You can check out the full patch notes here.