October 28 Epic says the Fortnitemares challenge that awarded Battle Stars instead of XP was a bug, and that they’ve fixed it.

Earlier today, you had a chance to bag yourself a massive haul of easy Fortnite Battle Stars as part of Fortnite’s Halloween-themed event, Fortnitemares. It was a total of 350 Stars just for a little hiking.

Epic says it was a mix-up, and that the challenge was only supposed to grant XP. The company has rolled out an update that corrects the problem – although you still will see Battle Stars in the menu as the reward for the bottom challenge.

The latest set of free Fortnitemares challenges is out now, and one of them is a multi-part task. The first part awards 150 experience points, just for visiting Wailing Woods. The second two parts of this challenge didn’t initially award XP – they granted Battle Stars instead. Stage Two instructs you to visit Fatal Fields, and just for doing that you’d earn 150 Battle Stars.

Once you had done that, you could take on Stage Three, which is simply visiting Haunted Hills. Doing that would net you a whopping 200 Battle Stars, for 350 total.

Dot Esports noticed this shockingly generous challenge payout, and they could hardly believe it – they were careful to point out that it might have been an error or bug of some kind. 350 is a lot of Battle Stars, and for battle pass holders, that’s a ton of progress toward the top tier. Usually Stars are doled out five or ten at a time.

Here at PCGamesN, Jordan experimented a bit this morning and confirmed that the challenge really was awarding Battle Stars – here’s a screenshot he grabbed, showing the Battle Star payout for Stage Two of the Challenge: 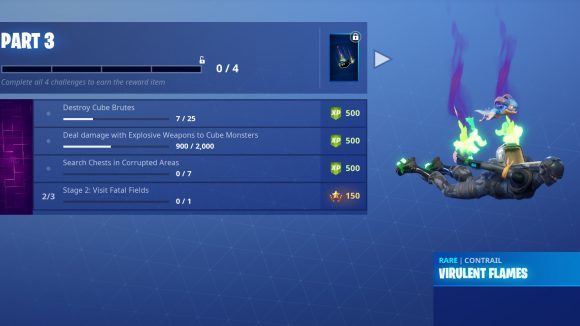 He correctly called it a bug – he says the challenge told him he’d have to land in a named location five times, but that the challenge unlocked after he’d done it once.

The good news? If you had already collected the Battle Star rewards for completing the challenge, you get to keep them. “This was our goof,” Epic said in a post to the Fortnite subreddit. “You will keep everything you’ve already earned.”