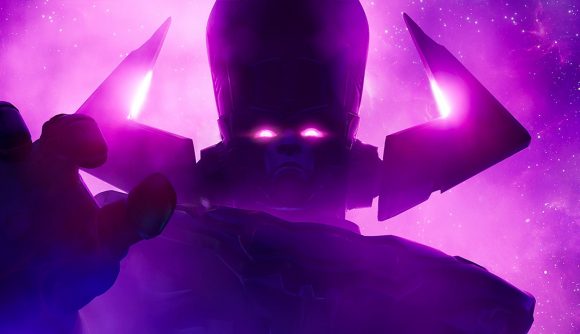 Last week, Fortnite developer Epic Games announced that one of the greatest villains from Marvel’s comic universe was headed the battle royale game’s way. Galactus, the intergalactic baddie, will be descending on the Fortnite map very soon, bringing with him the start of Chapter 2, Season 5. If you’re keen to catch the action as it kicks off, you’ve come to the right place.

The Fortnite Galactus event start time is set for December 1 at 13:00 PST / 16:00 EST / 21:00 GMT, so you’ve got just over a day from the time of writing to clear your diary and head into the game to see the action unfold. As these season-concluding events tend to be popular, it’s likely worth making sure you’ve logged in and got yourself a cosy spot in-game at least an hour before the event begins, as Epic advises.

Other than a new season, it’s not all that clear what the event will bring just yet. Epic’s dropped a couple of teeny teasers – for example, posts saying: “Uhhh… is that the Devourer of Worlds on the horizon? That’s not good!” and: “He hungers for the Zero Point. Galactus is closing in.” But that’s pretty much it at the moment.

However, we can likely expect something in the vein of the multiplayer game’s previous black hole event – that is, something big that could potentially wipe the slate clean for all the new content coming to the game after it. Or, it could potentially be more along the lines of Fortnite’s Season 2 flood event – either way, it’s looking like Galactus’ arrival will change a whole bunch of things up in-game.

He hungers for the Zero Point.

Galactus is closing in.

The event will likely mark the culmination of Fortnite Chapter 2, Season 4’s Nexus War, which has seen a raft of Marvel characters and content hit the game. Whether we’ll see this kind of crossover content continue in the next season, we’ll just have to wait and see – that is, if Galactus has left us anything to see once he’s done with the map. Gulp.