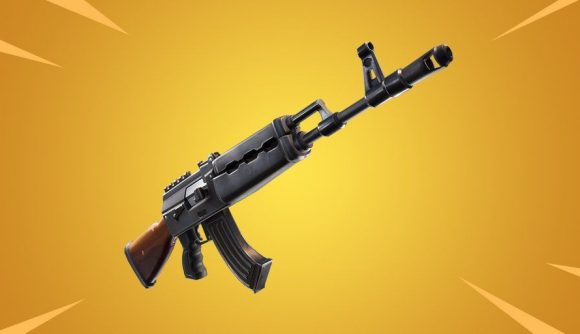 Fortnite will be adding to its growing arsenal of sometimes-goofy armaments with another weapon taken from the realistic column: the game is getting a brand-new heavy assault rifle, which will most likely show up next week.

The message of the day in the Fortnite client has been updated with a picture of the new rifle, shown above. The accompanying text describes it as a “powerful assault rifle that is most useful when fired in short bursts.”

That’s all the information Epic Games has provided, but it’s enough to make some educated guesses about how it’ll perform in-game. First, it’s clearly modeled on the AKM, which is a long-time standby in PlayerUnknown’s Battlegrounds. Since it’s labeled an AR, that means it’ll almost certainly use Fortnite’s medium bullets.

However, since the real-life AKM and AK-47 use higher-caliber ammunition than M-16s, Fortnite’s heavy assault rifle is almost guaranteed to have a higher damage output than its fellow ARs, and likely be harder to control as a tradeoff. That squares with the description’s warning that it’s most useful when fired in short bursts.

That same text also suggests it’ll be fully automatic – just like the AKM found in PUBG.

As Fortnite News notes, Epic hasn’t said when to expect the heavy assault rifle in Fortnite, but odds are good that it’ll appear in the next client patch, which will probably hit sometime this coming week.