If you’ve seen an inflatable cow bobbing around the Fortnite map, it’s not as innocuous as it appears – there’s a player hiding among the udders, bouncing towards victory. The new Inflate-A-Bull is an item recently added to Fortnite, which can be purchased from the Rick and Morty NPC, Rick Sanchez.

Rick can be found patrolling the top floor of the IO base, east of Weeping Woods. You can buy the new item for 25 gold; not bad considering it’s reusable. If you’re out of gold, the item does appear in chests, IO chests, and supply drops. So, here’s how the Inflate-A-Bull works.

You also need to use it to tick off one of this week’s Fortnite epic challenges, which seems udderly ridiculous. Using the Inflate-A-Bull is a deterrent for those pesky alien parasites as well, but does attract nearby UFOs, so proceed with caution. Although the Inflate-A-Bull is reusable, it isn’t indestructible, and can be popped by your opponent’s bullets. There’s a surprising amount of speed to it as well, so you can cover quite a considerable chunk of the map while lodged inside the inflatable Fortnite cow. 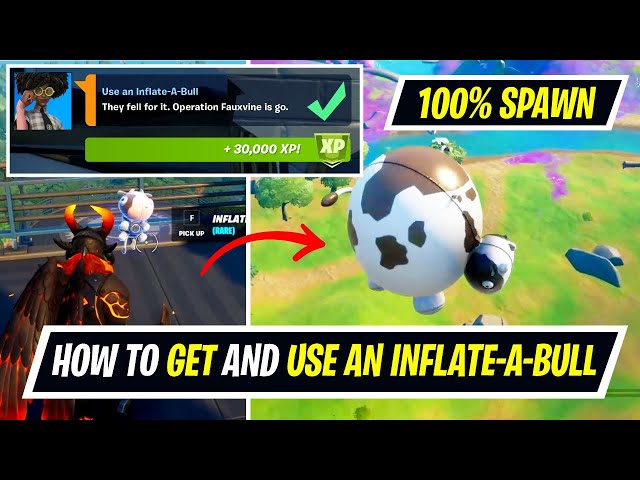 How to use an Inflate-A-Bull in Fortnite

The Inflate-A-Bull is equipped like an item and appears as a backpack which you automatically deploy when you jump. There’s a cooldown between each use, so you can’t deploy on a whim – but it does make for a quick getaway, and it also makes moosical cow noises.

For the rest of week 10’s epic challenges, you’ll need to visit a Guardian Tower, deliver a tractor to Hayseed’s Farm with a tractor beam, and damage Doctor Sloane – one of the Fortnite NPCs.