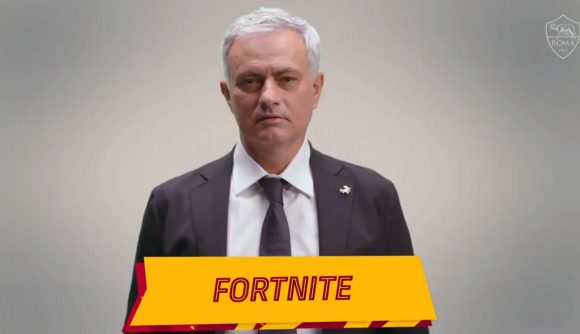 Legendary football manager José Mourinho is a big fan of football, Rome, and even Instagram, but apparently he doesn’t have much time for Fortnite. The former Manchester United manager calls Epic’s insanely popular battle royale game “a nightmare” and blames it for stopping his players from getting a good night’s rest – even when they have a game the next day.

This was revealed as part of a video series of “rapid responses” posted by the official English-language AS Roma Twitter account – AS Roma, of course, being the Rome-based football team that Mourinho is currently managing. He has a lot of nice things to say about various topics, such as his love of all forms of Italian food and the music of Bryan Adams and Bruce Springsteen. Even Instagram he refers to as “fun”.

The only harsh words Mourinho has in the entire video, in fact, are saved for Fortnite – which he calls “a nightmare”. As he explains, “football players, they stay up all night playing that s**t, and the next day they have a game!”

You can check out the video yourself below, with the comments on Fortnite coming around the 0:30 mark. We’re pretty certain Mourinho doesn’t have any real anger towards the game itself, as he says all of it with a smile – if anything, he’s more annoyed with his players becoming so obsessed with Fortnite that they forget to sleep.

There’s certainly no dislike for football/soccer from within Fortnite itself, which has long featured in-game football pitches and revealed a full football-based game mode earlier this year – complete with AS Roma outfits for players to unlock.