Where are the Fortnite lost spraycans? We know there are five of them to pick up, but there isn’t much of an indication as to where to find them. Luckily, however, when there is a spraycan nearby, we see some graffiti of a woman to tell us when we’re in the right area.

Season 10 has kicked off, Fortnite’s world has altered a little bit more, and there is new treasure to hunt while you try and stave off numerous attacks from foes. You’ll also find this week that there are different Fortnite gas stations to spray. Also, you’ll need to spray a fountain, junkyard crane, and a vending machine – we’re beginning to spot a graffiti-themed trend here.

For now, though, let us focus on those lost Fortnite spraycans. As a good bit of preparation, get your map out when you load into the game and are messing about in the waiting area. Put a check on Junk Junction as that’s where we’re going to start. To that end, here are the Fortnite lost spraycans locations.

As we’ve said previously, we’re going to Junkyard Junction first. If you’re struggling, it’s at the most north-west point of your map. More specifically, we’re looking to enter the junkyard from the top middle. Once you’ve landed, you’ll see an opening in the fence with a pile of rubbish immediately beside it. Once you walk up to it, you’ll be given a prompt to search for it. Do so, and you’ll have your first spraycan.

Next up, we’re heading south-east of The Block. If you look on your map, you’ll find what looks like a scrap heap that’s in the shape of a tree – set your marker for there. Once you’re there, you’ll see a dig-site that descends deeper – follow the path down, take a right, and you’ll get the same prompt to search for the spraycan.

A bit of a trek now, but we’re heading to the base of Viking Village – that’s south-west on the map in the snowy area if you’re struggling. Head to the frozen waterfall, and you’ll see the graffiti symbol. To get your spraycan, go to the nearest tree. 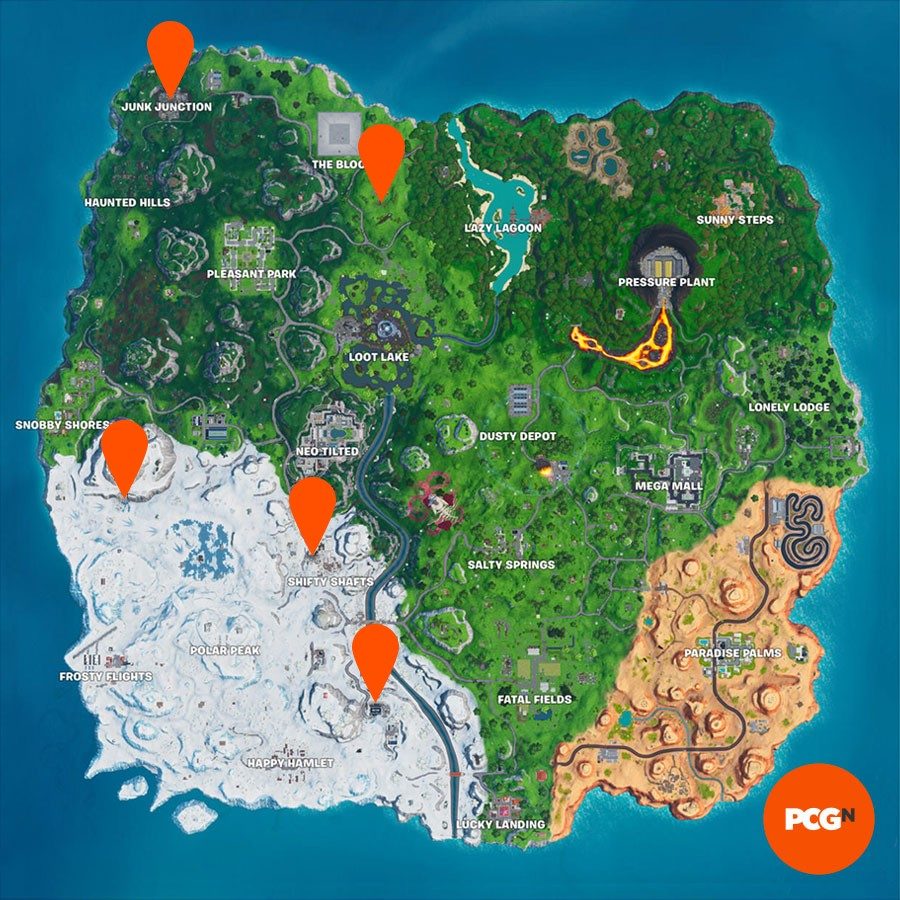 Nearly done, we’re taking a short stroll to the west side of Shifty Shafts next. Head into the shaft, take an immediate right, and you’ll see the graffiti woman through a wall of wood. Knock it down, and look to your left for the next Fortnite lost spraycan.

To wrap up, we’re heading south to the ruined warehouse that’s south-west of Happy Hamlet. When you first enter the area, you should the graffiti mark on a giant metal box, and a tent right next to it. Search the tent for your final spraycan.

And there you have it, you’ve now found all the Fortnite lost spraycans. If you’ve managed to do it all in one run without getting blasted in the face, we congratulate you. If not, don’t fret – your progress won’t reset, so you can take as many runs as you need.