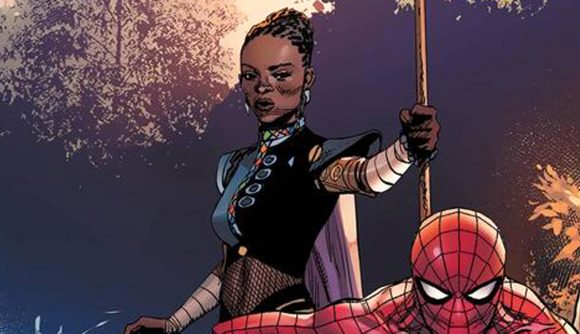 Other than being the most popular battle royale game around, Fortnite is well known for its awesome collaborations and crossover skins. Now, it seems like the next Fortnite Marvel skin could have been revealed thanks to a new crossover comic arriving in June, the story of which suggests Shuri from Black Panther is coming to the game.

Fortnite is still one of the best multiplayer games on PC and probably its most successful collaborations have been with Marvel. Spider-Man helped transform the current Chapter 3 Season 1, and the tie-in with Infinity War and the invasion by Galactus were some of the biggest events Fortnite has ever seen.

Now a new crossover comic has been announced for June, Fortnite x Marvel: Zero War – a follow-up to the Nexus War comic that revealed that Thor would be coming to the island. The first details on the comic have been revealed by Marvel, including that Black Panther’s technology-focused sister Shuri will play a big role.

This tease strongly suggests that a Shuri skin will arrive in Fortnite around June, and may even be included with the comic like The Batman Who Laughs was with last year’s DC crossover. Shuri will play a key role in the Marvel movie Black Panther: Wakanda Forever later this year, played again by Letitia Wright – so she’s certainly popular enough to get added to Fortnite.

So this seems to be the more or less confirmed design for one of the sisters and we'll most likely get a "Shuri" outfit as well! pic.twitter.com/6XFFEMKxG2

Epic has also just added X-Men Rogue and Gambit to the game, so there may even be more Fortnite Marvel skins before June.

Love can be a wild card. Let’s steal one more from fate, hm? ♠️❤️

The comic will also reveal Fortnite’s own characters The Sisters for the first time. They are part of the same team as Dwayne “The Rock” Johnson’s character The Foundation – who can be unlocked right now if you have the Battle Pass, but only for the next couple of weeks as Season 2 will hit very soon.