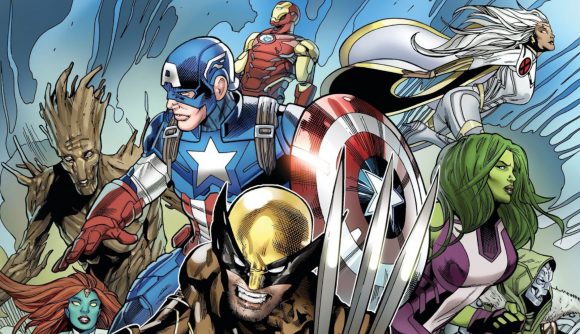 Fortnite Chapter 2 Season 4 will mirror the superhero theme of the last Season 4 – but this time, the heroes are all licensed. A host of Marvel skins are expected to debut as part of tomorrow’s new season, and the latest chapter of the in-game comic has given us a pretty good idea of what to expect, from the return of Captain America to a load of new additions.

The new comic pages see Thor summoning help from across the Bifrost bridge, and a posse of Marvel heroes make the jump – all-but-confirming the majority of skins to expect this season. Besides Thor, we’ve got Wolverine, Storm, She-Hulk, Doctor Doom, Mystique, Storm, Iron Man, Captain America, and Groot. Asgardian warrior Sif also appears in the comic, though she doesn’t make the leap to the Fortnite island with everyone else.

There are now a bunch of Bifrost markings near Weeping Woods (Fortnite Intel has a good image of them), so the teasers are now increasingly manifesting in-game. The latest comic pages end with a promise that the story will be continued in Season 4 proper, so it looks like our days of comic book reading are at an end.

If you’re catching up on the story so far, Galactus – Marvel’s World Eater – has arrived at the Fortnite island to, uh… eat it, I guess. We’ll see what that means in-game very soon, because the Fortnite Chapter 2 Season 3 end date is set for tomorrow, August 27.

The War to save Reality begins tomorrow!

In other Fortnite news, those Fortnite V-bucks are now permanently 20% off, and that’s been the kick-off of an already-messy legal battle between Apple and Epic. It looks like mobile Fortnite players won’t be getting in Season 4 at launch, so spare a thought for them as you’re slashing through your Victory Royales as Wolverine.