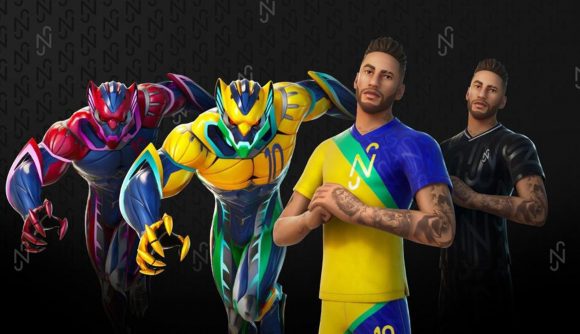 We knew Neymar Jr would be dropping into Fortnite at some point during Season 6, and now we know when. Aside from getting to look like the Brazilian forward in the battle royale game, there’s a special cup to take part in, a new custom mode, and more.

Neymar Jr is arriving to the multiplayer game on April 27, and the Paris Saint-Germain star will have all the usual bells, whistles, and emotes. The French capital, and home city for Neymar’s club, is featured in a Creative Hub makeover, to make sure you’ve a suitable environment to model the footballer’s skins. For any of his dedicated fans, you can take part in the Neymar Jr Cup on April 28, to win an actual custom designed football boot. Just one, mind – you won’t be rocking these at your next kick-around.

Neymar has four different skins: two based on football jerseys, and two kind of robotic looking superhero suits? Anyway. A new 8v8 “combat experience” will be available, the “Go Crazy Arena”, that’s been designed by some Fortnite players. It’s ideal, really, since taking out eight players of an opposing team is much more Neymar’s speed than a hundred-person free-for-all. You can find everything on the official site.

Once you’ve gotten him, here’s all the other best Fortnite Season 6 skins for you to collect.