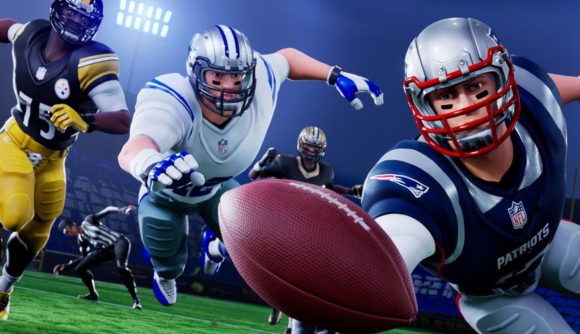 After years of criticism, the NFL’s Washington franchise finally retired its name ahead of the 2020 season, and is now temporarily known as the Washington Football Team until a permanent new name is chosen. Fortnite‘s NFL skin series has finally been updated to reflect the retirement of the old name, and Epic is offering refunds as a result of the change.

If you own any of the NFL outfits in the Fourth Down set – Blitz, End Zone, Gridiron, Interceptor, Juke, Rush, Spike, or Strong Guard – you’ll receive a message noting that “we’ve made some changes to this outfit” the next time you log into Fortnite. You’ll be able to request a refund any time before November 12, without needing to use the usual refund token in the process.

Epic doesn’t specify what those “changes” are, but players quickly found that the old Washington logo had been replaced among each outfit’s selectable styles, as Fortnite Intel notes. The team colours are still there, but no logo is available.

Technically that means that the Washington NFL franchise is no longer represented in Fortnite – just the colours – and thus, we’ve got refunds.

Slight Update: This refers to all NFL skins, the reasoning appears to be due to the team "Redskins" renaming themselves to "Washington Football Team" due to the old name being "racially insensitive moniker"

Maybe these Fortnite skins will get another change whenever the Washington Football Team actually decides on a new name.