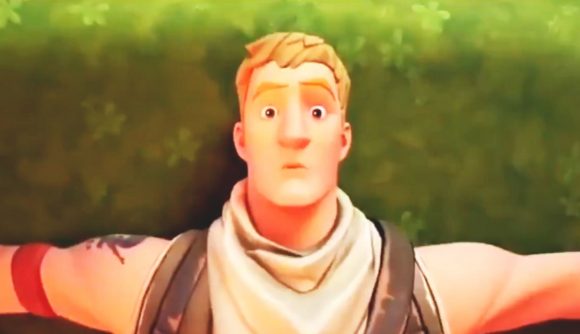 Fortnite Season 10 starts tomorrow, and from the teasers we’ve seen over the course of the last week, it looked as though Epic was preparing to dial back the clock. Earlier today however, that seemed to be confirmed, as Fortnite Brazil released the new trailer for the game ahead of time.

The video was quickly taken down, but members of the Fortnite community managed to capture it. Well-known dataminer Lucas7yoshi posted the trailer to Twitter earlier today, and you can check it out for yourself further down this article.

The trailer opens to a shot of Jonesy fleeing from a massive, blinding explosion. When he opens his eyes, he’s floating through space, and is just in time to see the rocket from the climax of Season 4 go flying past him. From there, there’s a bunch of meteor strikes, and a clip from the event that took place at the end of Season 5, in which Kevin the Cube became a beautiful space butterfly (or something like that – it got pretty confusing).

As the trailer progresses, references to event-specific cosmetics and season-specific in-jokes and features abound, from the Skull Trooper Halloween skin to the Durr Burger mascot head.

No HD downloads existed, was posted by fortnite brazil's account by accident for about a minute

At the end of the trailer, Jonesy falls back to earth, landing in an empty field. As he stands up, it becomes clear that he’s outside the as-yet untouched Dusty Depot, which was destroyed during the Season 3 event. The Depot is still intact in the trailer, but it appears that the game is frozen in time, as that aforementioned meteor is hovering in the air just metres from Jonesy’s head.

Quite what that means is still anybody’s guess, although a reasonable suggestion could be that players will be re-experiencing the events of previous seasons over the coming weeks. The new season isn’t set to begin until August 1, however, so we’ll need to wait until tomorrow to find out more.