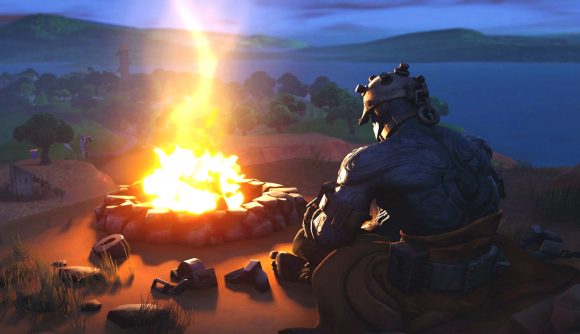 The Fortnite Season 8 release date is right around the corner, and Epic Games has dropped a big ol’ hint about its theme: Pirates!

The official Fortnite Twitter account posted a teaser Sunday in the form of a short rhyming verse. “‘X’ Marks The Spot / Treasure abound / Loot that has been lost / can always be found. 4 days to Season 8,” it read.

Talk of ‘X marks the spot’ and ‘treasure’ together is a pretty clear hint that they’re going for pirates this season, but if that isn’t swashbuckley enough for you, Epic also included an image that features what appears to be a hook. Hooks are associated with two kinds of people: Pirates, and the murderer in that one scary story kids told back in high school about the scratching sound on the car door. But given the references to treasure before, we’re going to assume this means pirates.

A pirate theme lends some credence to the theory that the snow currently covering the island is going to melt and raise water levels. That would certainly make space for pirate ships and perhaps a more nautically-themed season in general.

But what to make of the phrase, “Loot that has been lost / can always be found”? Is Epic planning on pulling some old weapons and items back out of the vault for Season 8? Or perhaps there’s an all-new kind of treasure hunt in store?

'X' Marks The Spot
Treasure abound
Loot that has been lost
Can always be found.
4 days to Season 8. pic.twitter.com/1U8n7x4pQQ

It would be cool to see some piratical weapons show up along the lines of the Bundlebuss – maybe something like a cannon version of the rocket launcher, or who knows, a parrot gun of some kind.

At any rate, we won’t have to wait long to find out what’s in store for Fortnite Season 8. It gets underway February 28. If it’s like the beginnings of previous seasons, it’s likely to start off with a bang. And probably a few Arrrs.