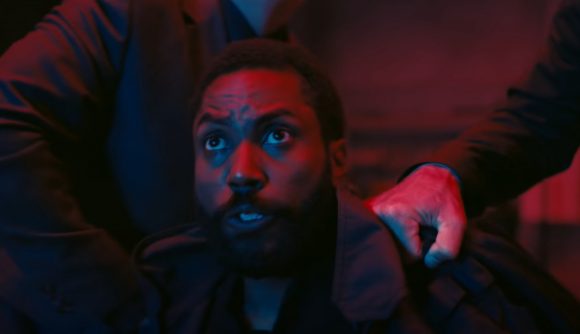 Fortnite’s power is becoming too great – oh no, somebody stop it, et cetera. After hosting concerts, comic book crossovers, and an integral plot event for the most recent Star Wars film, Fortnite is making the next logical step – premiering the next trailer for Christopher Nolan’s latest action thriller, Tenet.

You’ll be able to log into Fortnite’s Party Royale mode tonight to see the first run of the trailer at 17:00 PDT / 20:00 EDT / 1:00 BST, and it’ll run on the mode’s big screen every hour thereafter. I assume it’ll also be put on YouTube for proper viewing without the Fortnite trappings by then, but really, we’re living in unprecedented times here.

I’m pretty sure there’s an Inception joke in all this, but I can’t quite nail it down. Either way, it’s no real surprise to see a film trailer debut in Fortnite given the game’s media crossovers so far – it’s just weird that a cerebral Nolan thriller is the first rather than some family-friendly adventure film more in keeping with the game’s aesthetics.

Tenet is scheduled to launch on July 17, though how many theaters will be open to screen the film remains to be seen.

Grab a front row seat in Party Royale for a world premiere!

Catch the latest trailer for Christopher Nolan’s @TENETFilm at the top of every hour on the big screen starting at 8 PM ET.

There are other battle royale games out there, but precious few where you can catch an anticipated movie trailer between rounds.