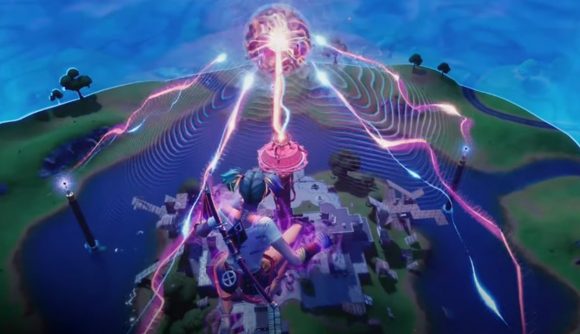 Fortnite had another one of its live events this week, and demand was so high this time around servers hit capacity some 30 minutes before start time. Epic has commented it’s working on ways to let more players in for future happenings.

Rather than another in-game musical performance like the Travis Scott event, last night saw The Device, in which season spy boss Midas launched his special contraption designed to stop the island’s storm. It didn’t quite work as planned, and almost the entire island was submerged as a result. It’s very dramatic, and more directly story-driven than Fortnite is typically.

Unfortunately, many of the interested players couldn’t get in to experience it fully. From Eurogamer, the queue to get into the event was halted a half hour before it started, leading to a surge in viewers watching it through Twitch and YouTube. As you might imagine, this left quite a few disappointed, so Epic released a statement explaining that capacity was limited to 12 million concurrent players for stability, and it is “improving systems” to increase that number for coming events.

According to Epic, over eight million tuned in on Twitch and Youtube to watch The Device as it happened. For comparison, Travis Scott drew 12.3 million and was Fortnite’s all-time concurrent record, beating Marshmello’s 10 million from February 2019, so as these events keep happening, more and more people are showing up for them.

We were overwhelmed by the response to The Device. At 12M players in-game, we capped participation for stability while 8.4M more watched live on Twitch + YouTube. As we push the edge of what live-events can be, we’re improving systems so more of you can experience them in-game. pic.twitter.com/YTycsB1Zoh

Goings on aren’t just limited to spectacular music shows and story bits, either. Fortnite premiered the latest trailer for Christopher Nolan’s Tenet a few weeks ago, and a special prelude to Star Wars: The Rise of Skywalker late last year. The next season, Fortnite Chapter 2 Season 3, is imminent, beginning June 17.