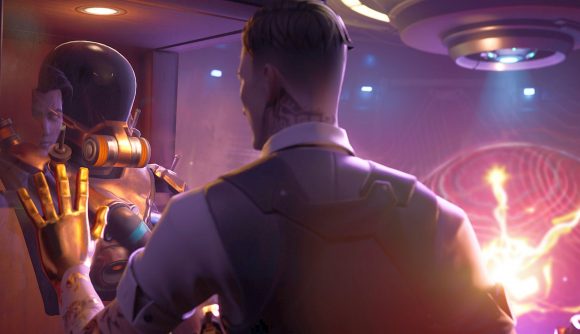 The Fortnite Chapter 2, Season 2 end date approaches, and the big in-game event celebrating its arrival is nearly here. Called ‘The Device’, the upcoming event kicks off later today (June 15) and is a one-time-only kind of a thing, ushering in the battle royale game’s next Season, so if you’re keen to know how and when to catch it, read on.

Ahead of the Fortnite Chapter 2, Season 3 release date, The Device in-game event will launch today, June 15, at 14:00 ET / 11:00 PT / 19:00 BST / 20:00 CEST. Details on what the occasion will bring, exactly, aren’t yet clear, but developer Epic Games is recommending that players head in to the game to watch it around 30 minutes early to ensure you don’t miss any of the action, as it seems space is limited.

The only real clue we have comes in the form of, well, a clue from Epic: “The clock is ticking, his plan is in place, can the Storm be Broken? The Storm rages on. Will Midas’ machine break the Storm?” The device in question appears to be the one found in Midas’ room in the game’s HQ, and it sounds like the device is going to activate in one way or another.

As to what will happen when the event’s kicked off and these questions are answered, is hard to guess. However, there have been recent leaks suggesting a flood’s headed to the Fortnite map, with underwater swimming animations, poster teasers, and even a new Season icon all pointing to a decidedly watery start to Fortnite’s next stage.

The Storm rages on. Will Midas’ Machine break the Storm?

The Device is set to be activated on June 15 at 2PM ET. Space is limited! Show up 30 minutes early to help secure your spot and be there live. pic.twitter.com/NfCSSOvjGc

If you’re not able to score a spot in-game for the event, there’ll surely be a bunch of Fortnite streams you can tune into on Twitch, so you don’t have to miss a thing. Get ready – the event goes live in just a couple of hours, as of this story.