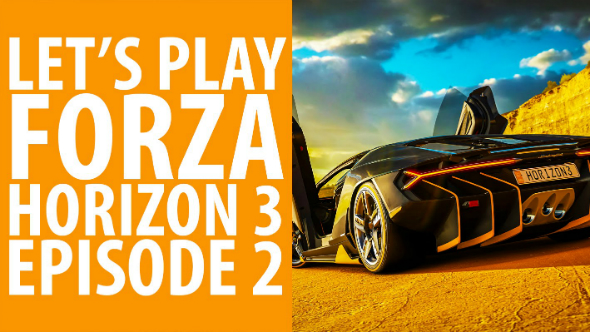 300 cars, a varied array of Australian settings to race through and a race where you’re pitted against a helicopter – we’re very happy about Forza Horizon’s arrival on PC. So happy in fact, that we’ve decided to celebrate its release with a Let’s Play. Joel and Phil take on the gorgeous racer for the second time, and rather than off-roaders and Lamborghinis, Phil’s behind the wheel of an Asian sports car – unintentional drifting ensues.

Tutorial sections nailed (sort of), Phil and Joel get to grips with some Forza Horizon 3’s other features, namely the rewind feature because Phil’s still having problems with cornering. Highlights to look out for are an attempt to beat a race that’s literally labelled ‘unbeatable’, Joel’s mind being blown by the rain effects and yet more claims of lag by Phil that we definitely don’t believe.

If this is the first time you’ve seen Phil fail to convince the world of his racing game credentials, be sure to check out the first episode for more calamities and excuses below.