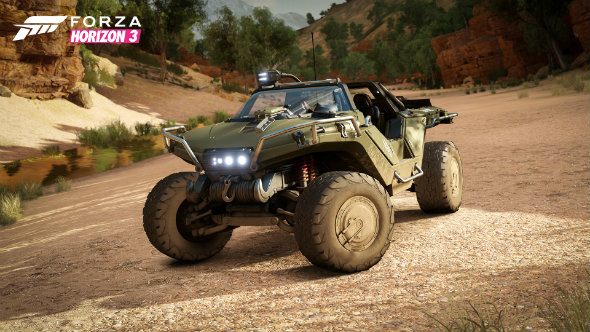 Forza Horizon 3 has gone gold ahead of its September 27 release on Xbox One and Windows 10. The discs are printed, the content is final, and now it’s just time for those last little tweaks that’ll be downloaded in the inevitable day one patch.

Will we need to update our list of the best racing games?

At launch there will be over 350 cars, including a modified version of Halo’s Warthog, which is unlocked by playing either Halo 5 or The Master Chief Collection on Xbox One prior to playing Forza 3. Download codes for the content will arrive in your Xbox One inbox.

Players who have not played an Xbox One Halo game will still have the chance to earn the Warthog via a special event coming to Forza Horizon 3 in October. Here’s the off-roader in action:

As for those specs, they’re pretty beefy, especially when you take into account the fact this is a game that runs on an Xbox One. You’ll need to be running Windows 10 on a DirectX 12-capable machine.

See the recommended specs below:

“Forza Horizon 3 players will have a tremendous amount of adjustment options when playing on Windows 10,” says the official announcement. “From basic options like full screen, vertical sync, and resolution, to more advanced adjustments like quality settings for motion blur, mirrors, reflection, static and dynamic geometry, we’re giving Windows 10 players the power to play the way they want.

“Whether playing on the recommended specs or pushing the hardware limits to deliver the ultimate 4K racing experience, Forza Horizon 3 players will have lots of options for making the most of their experience.”

News on supported racing wheels is to come later.