Sat deep in the headquarters of iconic British performance carmaker and F1 team McLaren, Playground Games chief creative officer Ralph Fulton has other things on his mind than the six-figure sports cars that gleam around him.

He and his team have been hard at work as the launch of their latest creation, Forza Horizon 4, nears. Playground worked closely with McLaren to make sure its most dazzling vehicles are included, but it’s roads that are occupying Fulton’s thoughts – those made from pixels and code, not the ones paved with tarmac outside. After all, even with the best handling physics and car roster possible, a driving game is doomed to mediocrity if its raceways don’t provoke exciting driving.

It was this subject that dominated much of my conversation with Fulton at the Forza Horizon 4 preview event. Below is our discussion of the creative vision that has guided a game that promises to improve on an already brilliant series.

PCGamesN: Why does it matter that Forza Horizon has been set in Britain this time around?

Ralph Fulton, chief creative officer: I don’t think location is trivial. I don’t think it doesn’t matter. We spent so much time agonising over what the right location for this game would be. It would be terrible if it were trivial; that would have been a lot of wasted time.

Certainly, in the way we build the Horizon games, location imbues each game with tone and personality. We always try – and we’re getting better game on game – to embrace location as more than just a backdrop.

So how does that manifest in the game the player experiences?

Our roads are handcrafted. It’s a point of pride for us. You can procedurally generate roads. If you have the right tools you can do it really quickly. But that doesn’t give you the driving experience we pride ourselves on in Horizon.

When you go over a pothole, you have to feel it

So here’s an example of why choosing Britain affects our road design. One of the first questions that I got asked a lot after we announced that the game is set in Britain was ‘are there potholes?’. The first thing that British people think when they hear about a driving game set in Britain is ‘are there potholes?’. The answer is ‘of course there are’.

That’s because, as soon as we went out and started searching for locations around Britain that we were going to pull into the game, we’d see potholes everywhere. That did present problems. Potholes meant we had to change the way we render our roads to get depth into them. It changed the way we think about our physics mesh, and also how that interacts with our tyres and suspension in our cars.

When you go over a pothole, you have to feel it. The ‘bu-bump’. But we don’t want to burst players’ tyres. So potholes highlight that there’s a gameplay versus realism balance we have to think about.

Also, a lot of British roads are narrower than the roads we typically have in our Horizon games. Add to that the fact that a quintessentially British road is one with hedgerows on either side. Now, we’ve never had that in a Horizon game before, and it throws up a ton of problems. But those hedgerows make the driving really interesting. 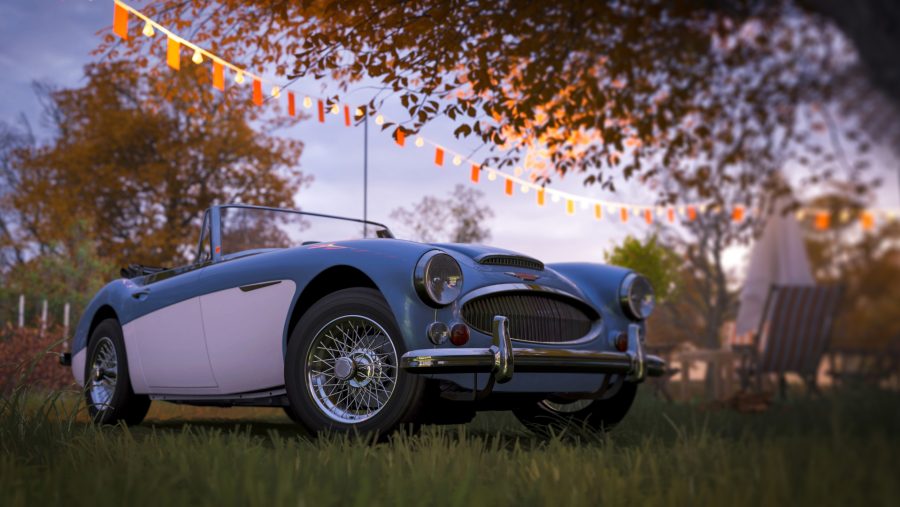 Because of them limiting or interfering with the player’s road view?

Yes. I don’t know whether we got lucky, or maybe it’s that Britain is unique in its topography and the nature of the environment. Maybe it’s because it’s a small island where everything is packed in, or because it’s old. Britain has thrown up a bunch of problems that we’ve had to solve on a case-by-case basis, just because of the way it is. But it’s been worth it. I think the open-world gameplay remains consistent through the series, but Horizon 4 has a different feel to it because of Britain.

How have you balanced the linearity that British road design forces with the freedom of the open road that the Horizon series is known for?

We have an incredibly talented level design team, whose job for most of the project – certainly the first two thirds – is going from a 2D map of our road network, which needs to be designed in 2D first of all, to building it in 3D, and then building flow into our roads.

Forza Horizon 4 will celebrate one of the UK's biggest driving icons with a day one pack. It'll include ten cars from across the past 50 years that James Bond has been with us, so expect plenty of Aston Martins - but not, unfortunately, any of the cool spy weapons hidden beneath the shell.

So we actually have to go in and engineer the flow, almost like the circuit-craft of designing real racetracks. We put that into every road in the game, and that’s hundreds of miles of game. The price of that is a team of people who go in at a per-centimetre sort of resolution, and caress our roads until they flow, and until the driving experience is satisfactory. That takes time and costs money, but what comes out of that is the Horizon experience.

To call the Forza Horizon games formulaic is unfair. But they do have a formula. How do you balance that with creating a game that feels fresh and stimulating?

That is a balance that we really feel on every game. I don’t take offence to that idea [of the Horizon formula]. Because I think if we were to abandon things that made people love Horizon 3 or 2, we wouldn’t be doing our jobs, and we would be rightly criticised for that.

Equally, if we just cookie-cuttered it, and said ‘hey, here’s Forza Horizon 3, but it’s in Brazil this time’, or something like that, we would be rightly criticised for not innovating. So I think we have a bedrock of stuff that our fans love, to the point that we can’t take them out now. A certain segment of our community would be in uproar if we did.

We have to do everything we’ve done before, and then we have to find new things, and new ways to innovate. I feel we’ve done that in Horizon 4 more than we’ve ever done in a Horizon game before. The seasons thing was a huge undertaking, and it’s never been done in an open-world game before – not dynamic seasons that change the world completely. And I’m not just talking about making the north of the map a bit snowy. The whole world goes to winter. I think that’s a huge innovation that will provide massive ongoing value to our players.

We’ve moved to a shared world too. We could have much more easily not done that.

Could you clarify what you mean by a ‘shared world’ in the context of Forza Horizon?

So by default when you play you’ll be connected to a server. The world will be shared among everyone who’s playing the game, and the other drivers you see in the game won’t be Drivatars anymore. There will be other people going about their games live. The easier thing for us would have been to not do that, and do what we did last time; having Drivatars that tootle around the world with your friend’s Gamertags above them. And you still have that option. If you wish to play solo you can, and that’s an important point.

But we’ve believed from the start – and now believe because we’ve seen it in action – that you can’t beat the experience of playing with others and even just seeing other people driving past and seeing the things that they’re doing in the same open world. It’s much more variously interesting and fun than anything we could engineer into Drivatar behaviour.

The subculture of car fandom – the Horizon festival, the music – is perhaps equally defining of Horizon. Why is that lifestyle element important to what the game is?

I’d separate those two things out. Music for me is basically about tone. What we’ve said from the start of Horizon, ignoring the festival conceit, is that driving is great, but driving to music is a different experience; and that’s the experience we’re going for. I think the feedback we’ve always had is that soundtrack is important. People look forward to our soundtrack, and people canvas for different bands or different artists. It’s clearly something they see value in within the game, so that’s why we’ll keep doing that.

The festival thing is really interesting in that it exists now to primarily give permission to all the things that we do within the game. We did this exercise at the start of this project, actually. It was a thought exercise. If we didn’t have the festival, what would that mean to a Horizon game? Could it still be a Horizon game? What we ran into were just more questions. Who’s making drift zones? How did they appear? Why are we racing here? 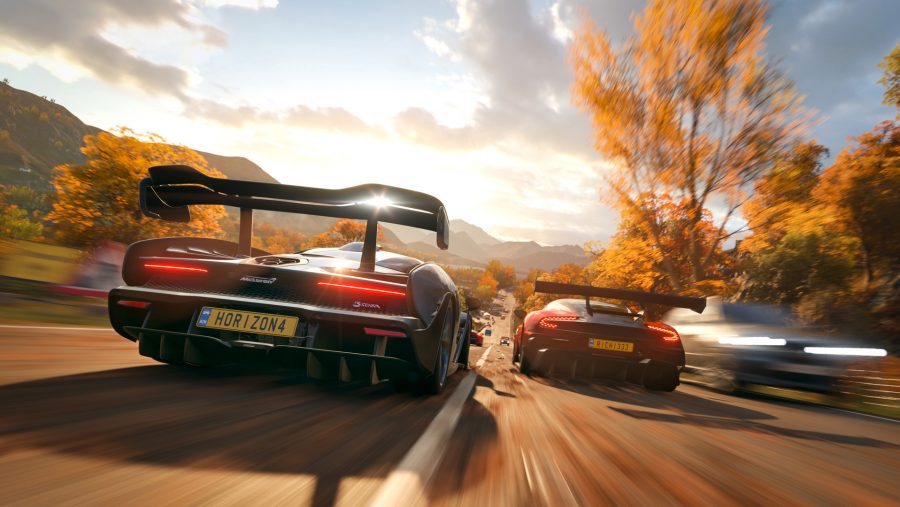 So the festival gives the game its internal logic?

Exactly. Without it I think what we’d have to do is a lot of heavy lifting, or have multiple little excuses for why all these things happen. And actually, what the festival very elegantly does – if you buy into its premise – is explain why all this stuff happens in an open world. That means we don’t have to get bogged down in time consuming exposition. It’s shorthand for ‘you’re going to do some fun stuff in cars’.

And who is this game for?

In the studio we believe that Horizon is a game for everyone. I would even say that sits above ‘every racing gamer’, because actually the real success of the series, and particularly Horizon 3, was that we ceased to be just a racing game, and we became an open-world game. We broadened our audience on pretty much every conceivable axis.

Hot Wheels brought in a lot of people, including a younger age group. It became a point of pride that we’re an ‘E for everyone’ rating. That’s because we have to be. We’re a game for everyone, we’re purposefully inclusive.

How do you tailor its various parts so that it attract such a broad audience, then?

You do that by having as much breadth to what the game is as you can, and then as much depth as possible in each of those columns as you can achieve. Then different people will play almost completely different games from each other, within the construct.

… game modes, activities, challenges, offline, online and so on. That’s exactly it.