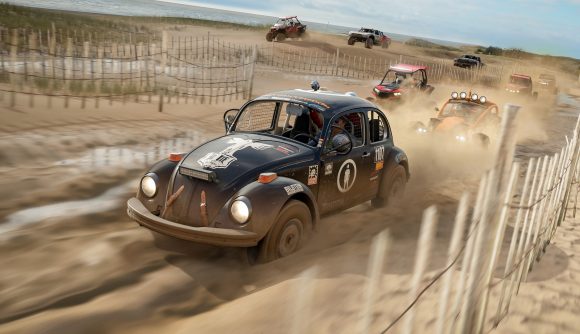 When it comes to experiencing the unbridled thrill of the truly open road, Forza Horizon 4 is king. At the moment, experiencing Playground Games’ open-world game on PC has meant going through either the Microsoft Store or Xbox Game Pass for PC, but next month that changes when Forza Horizon 4 arrives on Steam.

Microsoft has announced that Forza Horizon 4 will become available on Steam March 9. It will be available alongside its two expansion packs, Fortune Island and Lego Speed Champions, with a planned Hot Wheels Legends car pack coming at a later date both to the Steam and non-Steam versions of the game.

If you’ve never played, Forza Horizon 4 takes the open-world driving action the series is known for and adds in a changing season system, so you’ll be able to experience the UK countryside in spring, summer, winter, and fall conditions. The changing environment has an impact on where you can drive and how to get there, and you’ll get to see a bit of everything as you play through the racing game’s story campaign.

You can check out our Forza Horizon 4 review for more information. Since launch, Forza Horizon 4 has grown and added a bevy of new vehicles, including some fun vehicular crossovers with Halo, Final Fantasy XV, and Cyberpunk 2077.

There’s also a 72-car ‘battle royale’ mode included called Eliminator – you’ll drop into the map in a Mini Cooper and have to upgrade your ride and challenge other players to races in order to earn the top slot.

Forza Horizon 4 is a ton of fun, so if you’ve been avoiding it because it hasn’t been available on Steam, your chance to hit the road is coming soon.