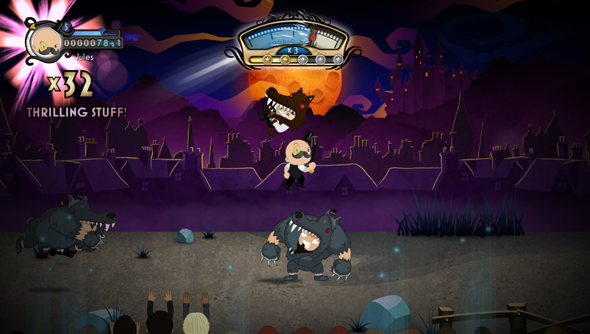 I just cracked a man across the head with my cane. I had to, he was an actor.

All your foes in Foul Play are actors. You play England’s greatest daemon hunter, Baron Dashforth, as he recounts his adventures before a theater audience. That means a lot of extras dressed up as monsters are going to get thwacked and you’ll be doing the thwacking, all in the name of drama.

It’s a wonderful grab bag of stagecraft, gothic storytelling, and combo-stacking combat. It’s just a too long for its own good.

Foul Play is Castle Crashers with a Victorian spin. You brawl your way across the 2D stage building combos and score multipliers to entertain your audience. Get a 50 hit combo and your viewers throw their hats in the air with excitement. Yet, if you get hit too many times they’ll start to boo you and, eventually, the curtains are pulled. Game over.

Combat’s all about stringing fights together. It can be a challenge. You send your enemies into the air with heavy strikes, following them up with lighter strikes. Taking a single hit loses you your combo, as does leaving the briefest of moments between successful hits. You’re always looking to move from one enemy to the next to keep the combo going. One scene had me smacking enemies into the air, pile driving them into their companions, and spinning my cane beneath them like a propellor to build my streak as they fell to earth. If you manage to clear the stage without once losing your combo you’re rewarded with a perfect scene.

The game supports shared-screen co-op. One of you plays Baron Dashforth, the other, his sidekick Scampwick Steerpike. Together you smack enemies into the air, build combos, perform piledrivers and, in theory, have a grand old time defeating the forces of darkness. In theory. 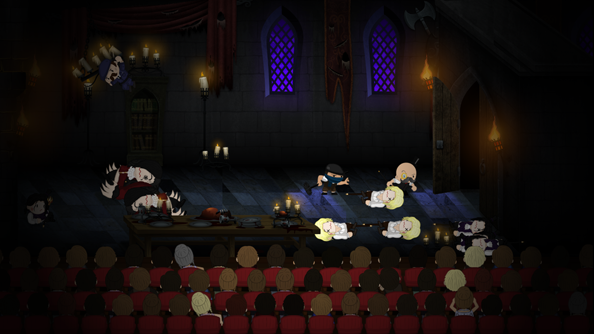 The theatre setting is perfect. Each level consists of multiple scene changes: as you fight your way across a gothic London, a cityscape background can be collapsed down in moments to be replaced by a tavern interior. Your screen is always moving between fights – seas raise, ships rotate into view, and, brilliantly, things go wrong. I burst into a dank castle hall to see the theatre’s handyman swinging from a chandelier he’d not managed to fit into place before my entrance. The rest of that scene he tried to swing inconspicuously while I fought vampires below.

The game is chock full of neat ideas, throwaway jokes, and little details. I adored the names MediaTonic thread through the game. You learn moves called things like “Air Slam or How Make a Chap Seriously Think Twice” and the game is split into five plays, each separated into different acts with titles like “Let’s Get Kraken”. If Foul Play were shorter I’d be a little in love with it. 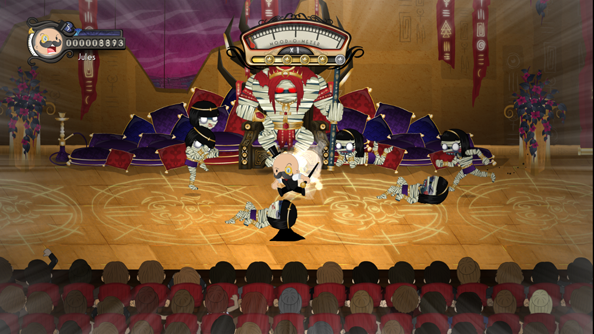 Each act takes about 20 minutes to burn through, and they’re full of repeating scenes. Six werewolves storm the stage instead of four or this time they have a heavy werewolf, too. If there were fewer fights or the enemies took fewer hits to defeat then you wouldn’t notice the amount of recycled content. But after a good five hours with the game I’d zoned out.

If the filler were stripped out Foul Play would only be a two hour game but it would be two hours flush with ideas instead of five hours sprinkled with them. It would make for a more appealing co-op game, too. You won’t find yourselves saying “Just one more act,” you’ll be loading up Castle Crashers. 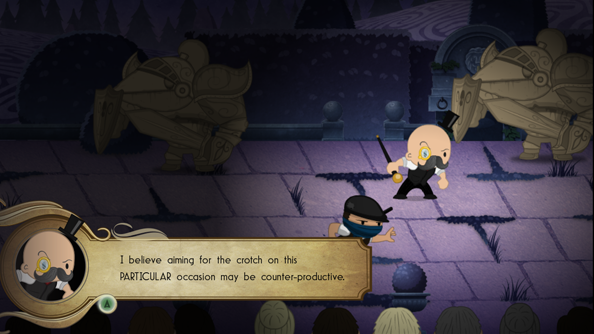 Foul Play should have brought down the house. But the pacing leaves the game corpsing