In Foxhole, you can change the course of a war without firing a single bullet. It’s unique, but can be explained quite neatly: it’s the first game I know that puts each mechanic of the traditional RTS in players’ hands. Resource gathering, tech research, scouting, and directing troops are all here, but it’s all manual – nothing is left to the AI. Combat is still there if you want it, but I’m not kidding when I say you can have a real impact without picking up a rifle.

Make some other big calls in the best strategy games on PC.

I load into a private server with lead artist Adam Garib, who shows me around. Foxhole is an RTS/MMO hybrid, featuring a persistent war that’ll keep going whether you’re online or not. Two armies face each other across a huge map – Garib says it’ll take 20-30 minutes to cross on foot – and fight to capture all of its control nodes. Within that sandbox, developers Clapfoot aim to model “every element of war, from weapon manufacturing and base building to strategy and combat,” as they say on the game’s Steam page. 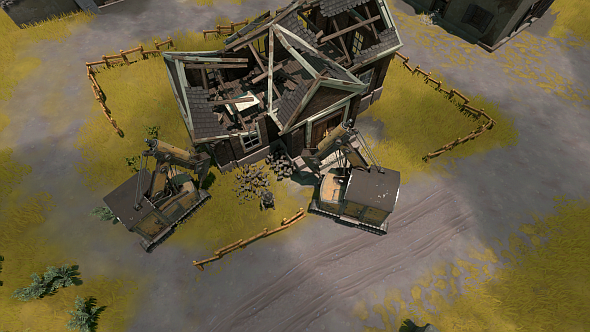 Take resource gathering, for example, which is probably easiest to explain in reverse. Frontline soldiers will choose and construct their own weapons at outposts, and as in any good strategy game, they cost resources to manufacture. Those resources need to be mined from nodes in the map, then carried to and deposited in the outposts where they’ll be most useful – such expeditions could take you well behind the front lines. In a traditional RTS, like StarCraft or Command & Conquer, this would be left to automated harvester units. In Foxhole, however, it’s up to you.

Currently, the game has three primary resources, each of which can be further refined into a processed resource; if a soldier wants a grenade, someone has to mine sulfur, someone has to take it to a factory and refine it into explosive material, then someone has to ferry that to wherever the troops are. These logistics matter: “Generally, the armies that win are the ones which are better organised – the guys who set up the better supply chain,” Garib says.

Soldiers need those supplies for personal firearms, and equipment like grenades, gas masks, radios and so on, but you can also build vehicles. I get to play around with a half-track – its .50cal machine gun chews through enemy infantry like a treat, until it’s blown up by a direct hit from an enemy howitzer.

Again, infrastructure is just as important as weaponry; soldiers have realistic inventory limits and encumbrance mechanics, so ferrying goods on foot is pretty inefficient. This means a quick and roomy cargo truck is as valuable to your war effort as a tank. 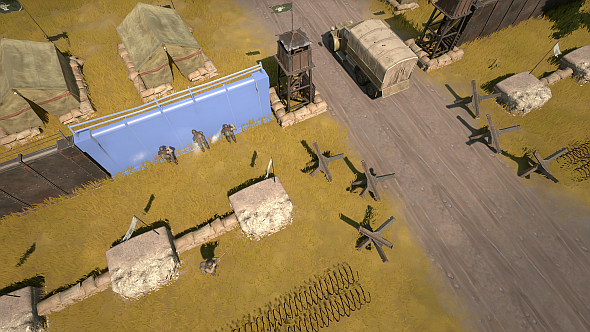 Speaking of which, tanks are a new feature being introduced in Foxhole’s latest build, and they’re pretty strong. To balance this out, you’ll need to put in a bit of work to unlock them. You’ll find wrecked tanks on the battlefield, Garib explains, and you can scrap them for a chance to get their “tech part.” Those can then be taken to a manufacturing plant for an upgrade that’ll enable you to build tanks, but there’s little point until your supply chain is robust enough to guarantee the necessary resources. In that respect, Foxhole has a kind of tech tree.

Various structures are also on the manufacturing menu; this means that, rather than fighting or gathering, you could decide engineering is your calling. I saw players building pillboxes to protect our foremost supply bunker, and defensive sandbags to frustrate approaching vehicles. With limited resources, there’s some skill in knowing which positions to fortify, choosing the right buildings to do so, and putting them in the optimal places.

The importance of having your supply chain running smoothly offers the enemy a real incentive to disrupt it. This is why sabotage operations emerge organically from the game design: ambitious teams might agree to invest in specialised equipment for their best fighters, and then send them in small, stealthy teams to blow up supply bunkers or weapons factories behind enemy lines. This is an RTS in which a ‘commando’ isn’t defined as such by its unit name, but by its battlefield role.

It’s not war unless people get hurt 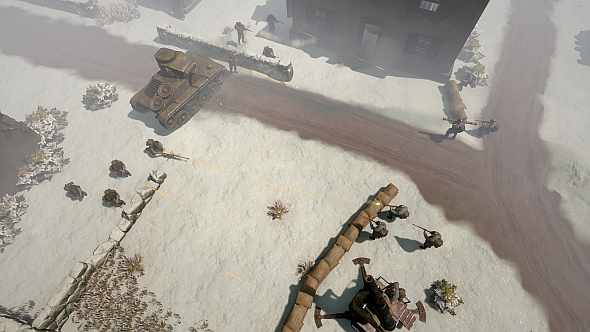 Ultimately though, it’s a war game, so someonehas to do the shooting. Garib leads me back to our frontline outpost and we designate it as our respawn point – if we die, we’ll revive here, but doing so will cost another kind of resource called soldier supplies. Naturally, we’ll also have to build a fresh weapon and some ammunition.

My demo concludes with some time on the frontline, where Foxhole feels almost like a different game – this is a tense squad tactics game all about communication, coordination, and lines of sight. You can rotate the camera, but it’s fixed at a certain height, “so you have to be strategic within those constraints,” Garib says. The spaces behind buildings that your character wouldn’t be able to see are also obscured by a fog of war, so good callouts – via a quick-access callout menu, text chat, or proximity voice chat – are key to staying aware of threats. Equally, smoke grenades are really useful for covering your own position. You’ll often know roughly but not exactly where an enemy is, in which case you can use grenades to spread some splash damage, or gas for a persistent area-of-effect attack.

This all reflects another reality of war: the value of information. In our game, almost all of our soldiers are concentrated on one control node in the centre of the map, and we’d be effectively blind right across the rest of our frontline if it weren’t for our watch towers. Also built entirely by players, these have a sight radius represented by a white circle on the map. If an enemy is inside that circle, it turns orange. “If you have overlapping watch towers, you can track enemy movement as they walk from one to the next,” Garib says. 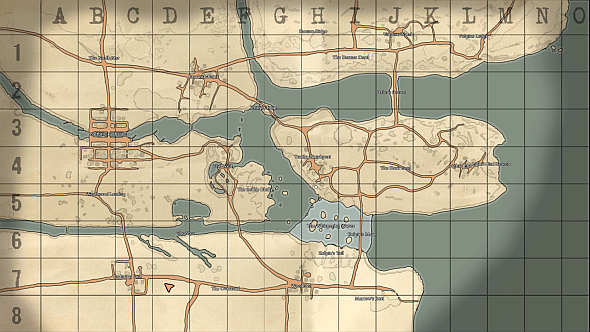 The catch is you can only see the information gathered by those watch towers if you build a radio – it’ll then be your job to play field commander, to relay that information to the rest of the team, and direct your troops accordingly. This is how you guard against sneak attacks and sabotage raids by the enemy – equally, it’s their job to scout out your watch towers and destroy one or two to create holes in your intelligence.

That’s all beyond me, for now. Across three lives I build some simple weapons and do what I can. Holding RMB traces a line from my rifle to the mouse cursor, and left-clicking shoots. Rifles are the most accurate, whereas SMGs spray off-target to a degree. If you played the original Army Men games (before they went third-person shooter) it might feel familiar. You move with WASD, can sprint, vault over obstacles for a quick evasive move, and can crouch to get behind cover. You can take a couple of hits before you go down, and you can be downed but not out – in each case, a medic with bandages can fix you up and get you back in the fight.

When it comes together

Our private server has been relatively quiet, but the scale of Clapfoot’s ambition should be clear by now. I ask if any of the public servers have produced a huge, epic battle, something approaching the scale of conflict they’re trying to model.

“Oh yeah, there’s actually countless [examples],” he says. “There are plenty of YouTube videos of clan battles – there are guys who created these large clans – and you’re talking a 40-on-40 battle over a town, which lasts like four hours. Then one of the factions might go behind enemy lines, cut off the supply lines, cut out their flow of soldier supplies, starves them out of the base and then takes it over. You’ve got these super-intelligent, shot-calling commander types – way better than I am. This is a relatively quiet match, but you can imagine what it’s like when it’s 60-on-60.”

I can. I’ve been shown Foxhole’s systems individually, but seeing them all come together in a huge battle, with experienced players working together – that’s a thrilling thought, the closest I believe that gaming has come to capturing the tension and challenge of warfare from infantry tactics right up to infrastructure, intelligence, and strategic planning. I hope it’ll generate enough interest for those battles to happen regularly – it’s early days, but on current evidence, it deserves to.

Foxhole launches on Steam Early Access today for $19.99. Check it out here.