Terrible storms wrack the skies, flinging forks of lightning down to the sands of the desert. They’re the brightest flashes of colour in a parched landscape – aside from, perhaps, the muzzle flare from the 100 guns carried across the map, or the flaming carcasses of abandoned player vehicles.

Fractured Lands is a Mad-Max-styled rethink of the battle royale formula, built around the concept of upgradable cars. Your vehicle is your punchiest weapon and most resistant armour – as well as your first resort when it comes to escaping the encroaching storms that are the genre’s calling card.

Want to the be the last person standing? Check out the best battle royale games.

Developer Unbroken Studios was showing Fractured Lands to press at E3, where you would never have guessed the game had been in development for less than year. Its team now totals 20, but started at under a dozen. Like the players eking out a brief existence on its PvP map, Unbroken has been stretching resources as far as possible.

“Unreal Engine 4 definitely helps out with that,” lead designer Eddie Rojas tells us. “Even though your world starts off as a blank canvas, there’s a lot of tools that Unreal gives you in order to be able to hit the ground running when it comes to game-making.” 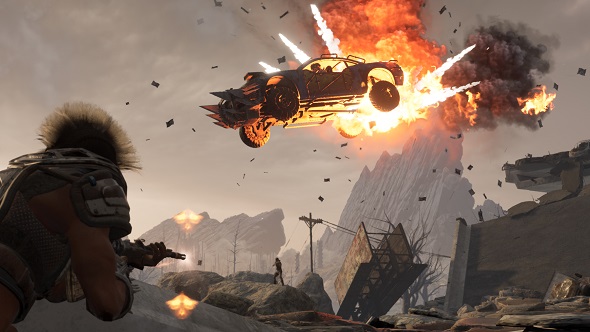 On foot, Fractured Lands is an FPS that could be compared to PUBG when played on its desert map, Miramar. But behind the wheel, it looks a little like what we’ve seen of Rage 2, playing out entirely in third-person.

That gives you a wider view of potential obstacles – or squishy targets to run down. And it offers you a chance to admire the car you’ve been customising. But more than that, it represents an attempt to widen the audience of first-person PvP too.

“We wanted to have our game to appeal not only just to the hardcore genre – which is first-person, hardcore military gun combat – but also the more casual audience that likes to have a little more fun,” Rojas explains. “And I think we’ve done a really good job of focusing our weapon combat to be very hardcore, but then focusing our vehicle combat to be more casual.”

Battle royale for the streaming crowd 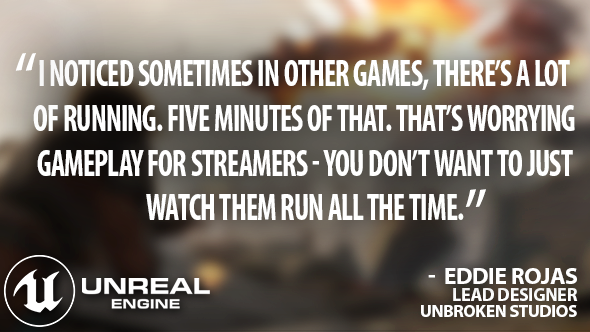 When the Fractured Lands team first added vehicles to the battle royale formula, they were unnerved.

Other battle royale games to date have been, for the most part, pedestrianised – and the vehicles they do have often go ignored by experienced players. Our own PUBG guide suggests that the racket caused by car engines in the stealth-focused game is rarely worth it.

In Fractured Lands, by contrast, you start with you own custom vehicle – a fact that the dev team found dramatically altered the pace of battle royale during testing.

“At first it was something concerning,” Rojas says. “But then the more we were playtesting and iterating, we found that it actually improved gameplay quite a bit. If you were ever in trouble, you were moving quickly.”

Just as important as how a battle royale plays is how it is watched – and it turns out the vehicles have solved an issue there, too.

“I noticed sometimes in other games, there’s a lot of running,” Rojas says. “Five minutes of that. That’s worrying gameplay for streamers – you don’t want to just watch them run all the time.”

It’s a fascinating design issue. You could argue that the frequent quiet of early battle royale games is exactly what makes the eventual action so tense and exciting. Yet a game can be made or broken based on whether or not it’s picked up by streamers, and Rojas is keen to eliminate the downtime between battles that makes broadcasters nervous.

“In our game, we’ve mitigated that completely,” he says. “It’s action all the time. If at some point you don’t want the gameplay of looting and being safe, you can always hop in the car and head for the main points of interest.”

“I’m very aware of what the battle royale genre is and I’m watching these streams, and we’re noticing what the weaknesses are and where we can improve the gameplay,” Rojas adds. “We’ve tailored our design to, ‘How can we improve this genre, tweak it as best as possible so it’s exciting all the time, not just in small spurts?’.”

Rojas believes Fractured Lands’ Fury-Roads-style setting makes it easy for Unbroken to come up with ideas that look good on film and take chances with the genre.

“We think it should be done that way,” he says. “I know that the stigma right now is that everyone is doing battle royale. We don’t want to handcuff ourselves and limit ourselves to what others have done.”

In this sponsored series, we’re looking at how game developers are taking advantage of Unreal Engine 4 to create a new generation of PC games. With thanks to Epic Games and Unbroken Studios.