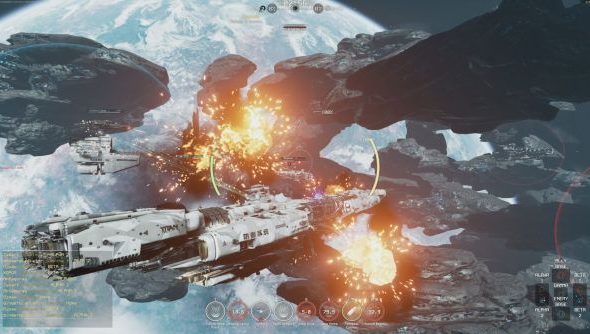 Spaceship team-fighting game Fractured Space is getting custom games. This will allow players to build teams of their friends, up to five members, or play solo vs. someone else. It’s a vital step towards what has proved the engine powering every other MOBA – eSports. Developers Edge Case Games have also debuted a new ship, the shotgun-like short-teleporting TDS Persecutor.

Could Fractured Space join our list of the best games of 2016 when it releases out of Early Access later this year?

Sam Bennett, Community Director, had this to say about the introduction of custom games:

“Fractured Space is at its heart a team game, and Custom Matches will bring a number of important player benefits, from playing fun matches with friends to full-on clan training exercises.Thanks to our open development model, ECG is able to listen and adapt to features that are important to our community.” Sounds like it was something the community were after, understandably if they’re interested in the game’s competitive future. Edge Case have also made it so that all ranking stats are visible to each team’s captain as the match is created, letting teams be balanced easier when not every player is known. For those that want to get involved properly, a new Steam group has been set up to facilitate it.

Here’s that new ship shown off in cinematic style:

Moving with speed like this just isn’t something that is commonly possible in Fractured Space, so the impact of this ship will be interesting. It’s a slower, lumbering affair usually, with engagement ranges approaching sniper distances most of the time. The decaying, location-based armour system also means that blinking around ships, as well as towards them initially, could be very powerful.