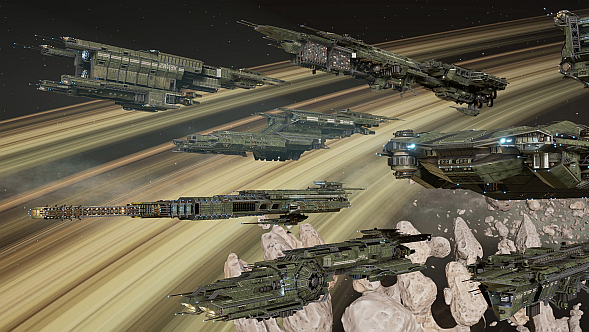 Free-to-play sci-fi MOBA Fractured Space has got a new update, Phase 3, which has just gone live. It’s been designed to add action and pace to the game, and will do this with a new game map, quicker respawn rates and tweaks to resource mining.

Gosh, there are a lot of MOBAs around right now. But which MOBA is right for you?

Phase 3 was first announced on March 2, with features being added to the game in slices over the past month, but today marks the fully-featured launch. The new map is titled ‘Conquest 2.0’, and developers Edge Case Games have published a breakdown of how it differs from the original on the game’s website.

Mainly, the map is “tighter – objectives and jump points are a little closer to get you into combat faster, respawn times have been reduced, [and] it’s easier to attack but also easier to defend.”

Another tweak is the addition of drone ships, which can be shot down to reduce enemy resources, thus making mining more impactful. New players will also get audio tips to get them up to speed.

Elsewhere in the update, players will receive the ability to fly any ship in solo versus AI mode, so you can test ships for free before forking over money for them. Tougher AI captains have also been added, as has a level-up system for your crew, enabling more complete ship customisation. Check out the patch notes for a full list of changes in Phase 3.

As Phase 3 has been rolled out over the last month, reaction on Steam has been mixed, with some veteran players lamenting the faster pace and accusing Edge Case of caving to player pressure. One could argue that tuning the game to the preferences of the community is the goal for multiplayer games, with optyk24 claiming on YouTube that the critics are a minority who have “held the game back” thus far.

Fractured Space is a space-based MOBA – with a three-lane map and all – in which two teams of five large capital ships compete to destroy their opponents’ base. It features regular live events, the next of which starts on April 13 and will challenge the player community to earn 100 million credits. If they do so, all contributors will receive a unique skin.

It’s free to play on Steam here, and if you’d like a preview of the changes, there’s atrailer for Phase 3 here.