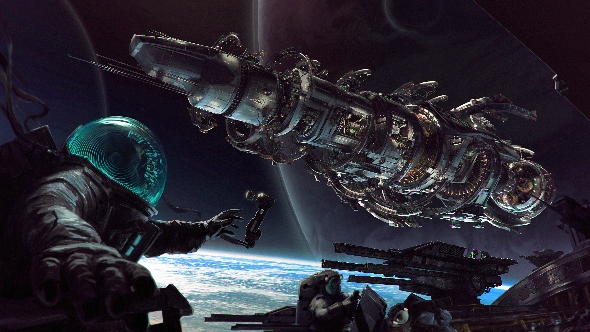 Fractured Space, the galaxy-faring MOBA, is a beautiful game. Some of its good looks can be attributed to Unreal Engine 4, but the key to its shine can be found in the industrial art style that offers a unique feeling of realism. It’s more NASA than Star Wars, and you’ve never quite seen anything like its kilometers-long, asteroid-cracking behemoths before.

Want to explore among the stars? Warp jump into one of the finest space games.

Many of the ship designs are born at the desk of Edge Case Games’ lead artist Alex Clarke. Intrigued by his work, I sat down with him for a detailed chat about creating huge deep space warships.

Take players where they’ve never been before

Before stylus is put to drawing tablet, you need to know exactly where the roots of your design lie. For Fractured Space, Edge Case Games knew they wanted to make a science fiction universe that was far more believable than those seen in other games.

“We tried to step away from conventional sci-fi,” explains Clarke. “[Traditional spaceships] look good but they fail to convey a sense of scale, and that’s what we’ve really been pushing for in the art direction.”

In order to achieve that scale and believability, Edge Case have looked to existing technologies and structures. “We tried to go with something that’s familiar to people,” Clarke says. “We’ve tried to build a realistic and believable universe that people really want to buy into, and to achieve that immersion you need to have things that they find familiar on a subconscious level.” 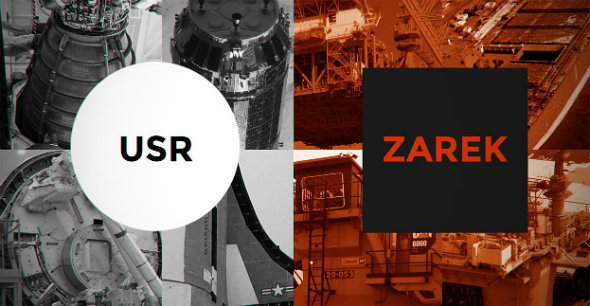 With ‘believable’ being the key word for Fractured Space’s art style, Clarke and the team began to research existing materials, structures, and technologies. They decided to create three spaceship manufacturers with each drawing on very different real-world elements.

“NASA was an obvious style choice for United Space Research, because we wanted a deep space exploration manufacturer,” reveals Clarke. “We spent a lot of time looking at NASA research and taking their motifs, which is a very utilitarian, cylindrical design. It’s a black and white colour palette with orange fuel tanks, incorporating layered panelling, concentrations of very high detail, and a lot of gold shielding and solar panels.”

One of USR’s rival corporations is Zarek Industry, a manufacturer specialising in mining vessels. “Zarek is very heavily based on industry, so we did a lot of reference gathering on oil rigs and big industrial plants, looking at how those things are put together,” says Clarke. “It’s a very brutalist, kind of cubic style.”

While USR’s ships feel naturally huge to players because of their basis in real spaceship designs, a little more care had to be taken in Zarek to convey the scale. “A lot of the problems we faced were finding things that were massive, and identifying how you subconsciously know something is big,” Clarke reveals. “We started breaking elements down and pinching reference points that are familiar so that you immediately recognize details and associate them.” As a result, Zarek ships resemble oil rigs with elements like yellow structure beams and winking red lights on tall towers. Just seeing these familiar elements helps you understand that the ship is huge.

The final manufacturer in Fractured Space’s war is Titan Defence Systems, which is the most sci-fi of all the factions. “They’re our take on naval and military technology,” says Clarke. “We took a lot of reference from naval fleets and old ‘80s Soviet aeroplanes. They’ve got some very interesting shapes that set them apart from the others.” 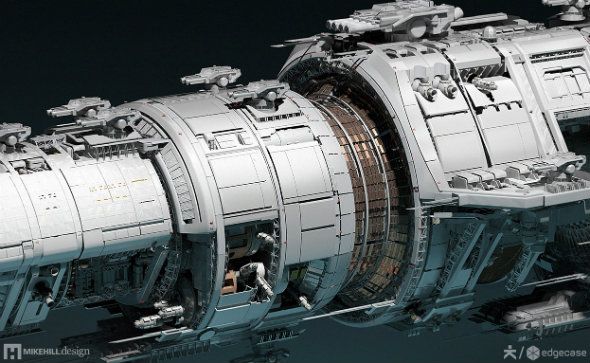 While the brief demands that each of the two-kilometer-long ships must be believable, Clarke does allow a little sci-fi leak into his designs. “We definitely take reference from some kind of sci-fi, but we’re a little bit more Alien in tone than we are Star Wars,” he says. “The Sentinel is fairly heavily based off the Sulaco from Aliens. It’s kind of that big shotgun shape. The profile definitely fitted in with the idea I had for the ship, so it’s influenced it quite a bit.”

For all of Edge Case’s push for realism, they do know where to draw the line. Despite using NASA research for USR ships, the documents influenced materials and visual design only. “If you’re going to go down the functionality route then you’re essentially making a space sim,” explains Clarke, and that’s not what Fractured Space is aiming for. “We do a lot of research as to what kind of tech NASA are using and how we would implement that into our designs, but it came down very much to the base aesthetic.”

“You can only go so far,” notes Clarke about realism. “It gets driven by gameplay a lot more than you’d like it to.”

While Fractured Space’s ship designs are clearly very realistic compared to the majority of sci-fi vessels, Clarke and the art team have included classic fictional elements such as windows, exposed bridges, and naval ship-like decks. They’re the kinds of things that deeply annoy hardcore science buffs, but Clarke explains that there’s a good reason for them being there.

“Some elements that people don’t like from a realistic point of view work well to establish scale,” he says. “We have bridges on some of our ships because it gives a good point of reference for how big something is. When we started making ships we said ‘No window lights because that’s just silly’. But as time progresses you realise those tiny little lights work really well to emphasise the scale of the ship. We looked at skyscrapers to see how those window lights are set out, and began to replicate that on a much more microscopic scale across the ship.”

There are still people in the Fractured Space community that dislike such realism concessions, though. “I got criticised for adding a runway to the front of a ship so you could launch fighters forwards,” reveals Clarke. “It makes sense to me, but their argument was that someone’s going to fire at you from the front into your hangar and destroy all your ships. But the same could be said for any kind of direction!” he laughs. 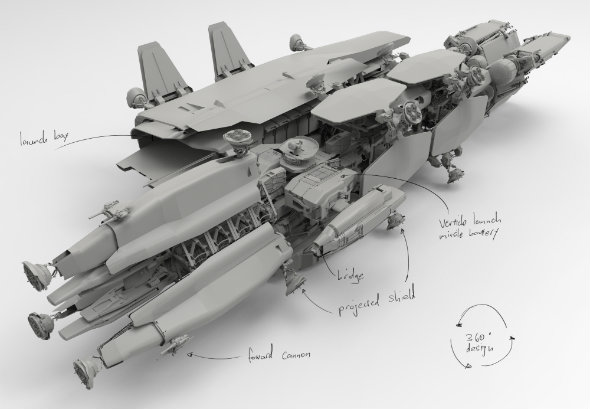 With all these philosophies and technologies in mind, the art team can start creating individual ships. A new craft begins with a gameplay brief from the design team explaining exactly what the ship must be able to do in battle. With this as a guide, Clarke can begin to bring the ship to life.

“With something like the Reaper or the Interceptor, their visuals are based on exactly what the ship does, and this is something we really tried to convey,” explains Clarke. “You immediately need to be able to identify what that ship is at the other side of the map so you can work out the risks, know what kind of ranges you need to be at, and how you’re going to attack it. It’s imperative to have a ship silhouette that says exactly what it’s going to do.”

While each of the ships are exceptionally different, there are some shared design elements. “If it’s a long range DPS ship it’s kind of an arrowhead, so they point towards the nose which is where most of the firepower’s going to come from,” Clarke says. “It immediately gives you an idea of how to start dealing with this ship if it jumps into a sector.”

With a basic shape in mind, Clarke can then start applying the style of the manufacturer and turn it into a formidable-looking behemoth. “Once you’ve got all the big shapes you can break it down into smaller shapes and establish where the scale is going to derive from,” he explains. “You work out where those details are going to be. You add hangars, turret position points, and the vernier thruster placements.”

There’s also the future of the ship to consider, too. “At the same time I’m thinking about how we’re going to do different skins for this ship, because that’s obviously where pretty much all of our revenue comes from,” Clarke notes. “I’m thinking ‘How can I make this even better in the future?’”

It’s not sci-fi without special effects 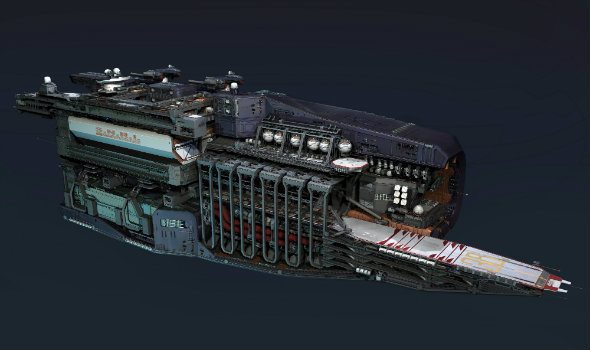 As important as the ship designs themselves are the effects, which need to both look impressive and convey the theoretical science that’s behind much of Fractured Space’s technology.

“Our jump between sectors is the Einstein-Rosen bridge, so the theoretical science is there,” says Clarke. “We tried to mirror that with the effects, so as you jump from one point to another these rings are created around your ship. We’re trying to get [the theory] conveyed so it makes sense to the people who know their science.”

In order to allow gameplay variety, sometimes the science is pushed a little beyond the boundaries of realism. “We have a ship that generates a pulsar at the point where you’re attacking someone which is… yeah, we’re grasping at straws there if we’re honest!” laughs Clarke. “But it looks cool, and it’s theoretically possible I guess! We don’t create systems that are just fantasy.”

Keeping these futuristic systems grounded comes across in the use of colour. “We’ve tried to desaturate a lot of stuff so it doesn’t come across as fantasy,” Clarke says. “Especially when you’re dealing with purples. It’s a very difficult colour to work with.”

It’s important that the use of colour acts as an informant as well as looking great. “There’s only so many colours you can use because we need to specify certain systems and tie them into certain palettes,” explains Clarke. “So you know that shields mean blue, and debuffs are red. You’ve got a very limited palette to work with.”

A ship is born 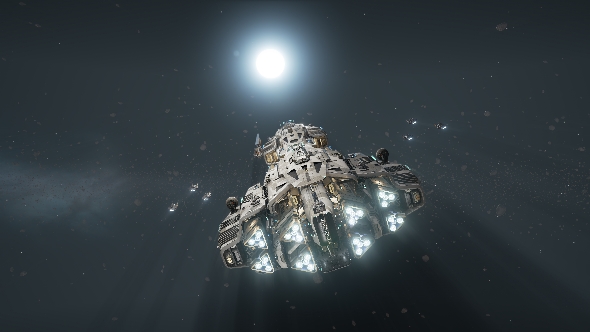 With all these steps completed, a new Fractured Space ship joins the fleet. All of the game’s ships are unique, both in look and function, and are unlike almost anything you’ve seen in sci-fi before.

It’s a process that seems to please Clarke immensely, mostly due to being able to share his love of grungy, industrial ‘80s sci-fi with other fans. “Having grown up in the ‘80s with all those sci-fi movies, it’s been nice to have all of that ‘training’ to fall back on,” he enthuses. “I’m designing things for people that grew up in that generation too.”

If you share Clarke’s love of that era and want to test-pilot one of his incredible designs, Fractured Space is free to play on Steam.