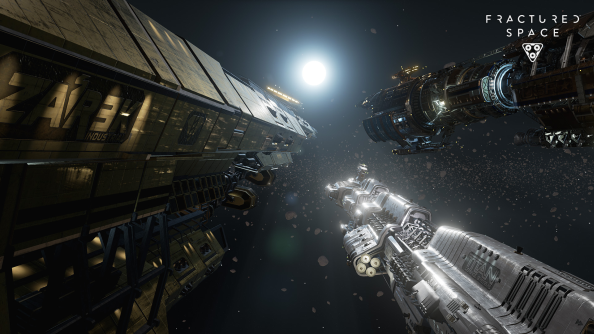 Fractured Space doesn’t look like a MOBA. It’s about balletic battles between ginormous capital ships. It’s Wrath of Khan; the Colonial Battlestar against the Cylon Basestar; Imperial Star Destroyers vs the Rebel Alliance. It’s about warping into an occupied sectors of space, exposing your best-armoured side and lobbying your enemy with mining laser fire until they consider giving up their forward base.

While we’re on the subject, which is the best MOBA of them all?

And yet, at a high level, it has the hallmarks of a LoL or Dota. Here’s why you ought to keep an eye on Fractured Space and its competitive future.

Players have power over the metagame 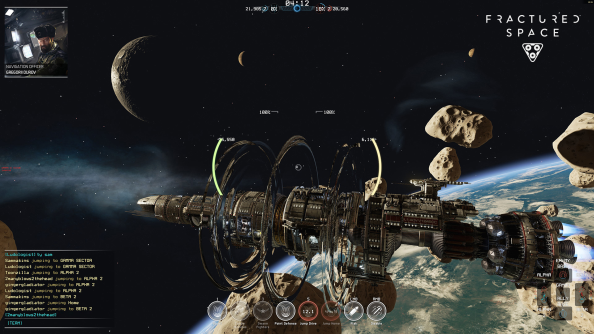 There are moments, after Edge Case push a new update into Early Access, when they simply have to not bottle it. Like the captains sat in high-backed chairs on the bridges of their capital ships, they’ve got to keep their heads while everything explodes around them.

“You release something and you’ve got limited testing time,” explains Edge Case CCO Jim Mummery. “You think, ‘Oh it’s great, it’s a really nice system, it works really well’. And then someone says, ‘Have you ever tried using a brawler and a displacer at the same time?’”

For the uninitiated: the brawler is equipped with a harpoon torpedo capable of digging into and yanking an enemy ship towards it, while a pulse from a displacer will physically push enemies out of its blast radius. As it turns out, if a brawler hauls a displacer and a displacer punts a brawler, the pair can hotfoot it down a lane at double speed.

“Jim is the hero. Everyone else will be like, ‘This is ridiculous, we’ve got to change it now,’” laughs chief production officer Dylan Beale. “And he says, ‘Let’s see how it plays out, we’ll give it a week.’”

As it turns out, the brawler-displacer one-two is an “awesome” addition to the meta.

“It’s like a LoL thing where you’re doubling,” says Beale. “You want that to happen – you want ships to team up and have abilities.”

Like the top MOBAs, Fractured Space is a living game – and its developers are learning not to snip too quickly and discourage the growth of an organic meta.

There are lanes, despite appearances 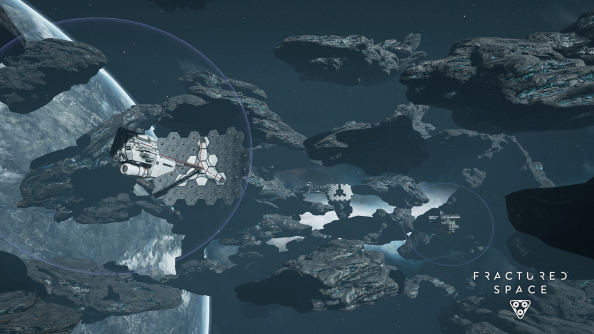 Yes, lanes in space. Fractured Space maps are divided into sectors: totally discrete areas accessible only by warping in and out. But together they form pathways that teams either need to push or defend to secure a victory. By separating space into segments, the game encourages players to think in plays and high-level strategy.

Sectors also get around the problem of geometry in space – “really f***ucking hard”, by all accounts. Where a LoL map can create chokepoints through terrain, sectors provide a similar kind of structure in which to mount attacks and control space. And of course, jumping in and out allows for cinematic sci-fi moments – a fleet warping in without warning, or a ship picked apart during attempted escape.

There are no creeps, but you’re definitely the biggest fish in the pond 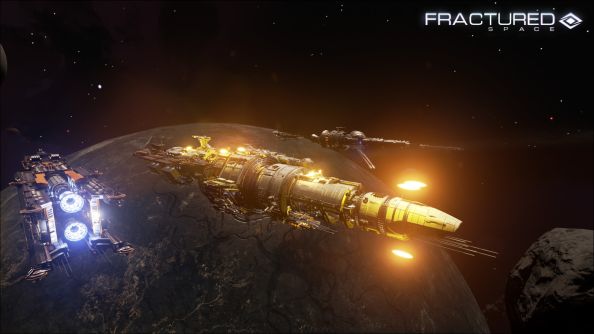 Fractured Space is about capital ships – vessels that match the Golden Gate Bridge at their smallest. At this stage of development, that scale can be difficult to appreciate. But Edge Case have plans for more visible contrast – beyond our suggestion of a comparative wall chart made up of school buses, Eiffel Towers and t. rex, that is.

“We want the little world: the small fighters and everything else,” expands Mummery. “The moment you capture mining stations, we want them to send out little [ships] to mine, which run away and hide if somebody is trying to take it – visual components to help communicate what’s happening.”

Why doesn’t Fractured Space have minions crossing the map? It doesn’t need them.

“We’ve got players as the force behind how the world gets taken,” says Mummery. “But we want it to feel alive, so we do want small ships.”

Though there are many, many forum posts that would have you believe otherwise, balance is subjective.

“People talk very passionately about a personal experience they’ve had or how they’ve played,” says Mummery. “That’s valuable, you don’t negate that. You have to listen because they had an issue with the game.”

Edge Case have their metrics, of course. But sometimes the perception of a ship’s power can be more important than the truth of the matter.

“You’ve kind of got to release it a little bit OP,” confides Beale, “so that people like it and enjoy playing it. If you release it and it’s slightly underpowered, it’s marred forever.”

“They’ll play it for a bit, get disappointed and then you won’t find out what you need to know,” adds Mummery. “Because nobody’s interested. It’s just dead.” 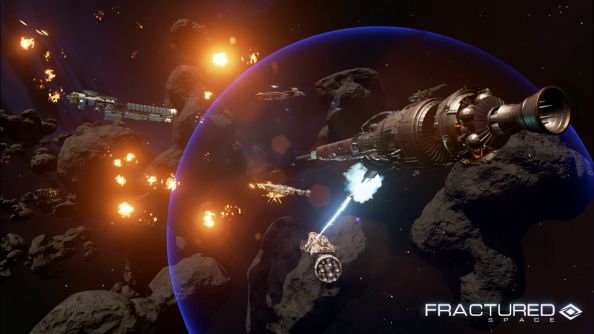 There are two types of Fractured Space player: those who play by feel, and those who play by maths. The best pilot in the Edge Case office is a coder who sees the game in numbers (“Unless he makes a mistake he’s going to kill you all the time”).

Even in Early Access, the year’s investment some players have put into the game is all too apparent. The gulf in ability between those vets and the greenhorns fresh from Steam’s free weekend is something that requires careful management.

“The two guys who have just started with their first unlocked ship don’t want to have a terrible game because they don’t understand the intricacies of blink allocation and turret rotation,” says Mummery. “It’s about balancing to skill.”

That said, Fractured Space seems to attract a certain kind of multiplayer-savvy, meta-minded newcomer who picks up the game “scarily quick”.

“You’ll be playing against somebody at a high level and post-game you’ll check the number of games they’ve played and it’s low,” says Mummery. “They just get the game.” 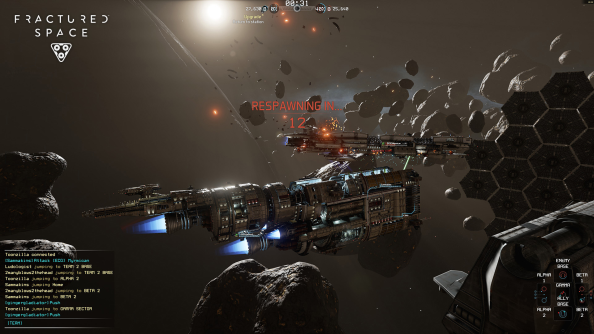 The players consider it a “future eSport”

“They’ve got their clans and they’re really serious,” says Beale of Fractured Space’s playerbase. “We’ve run a couple of tournaments and they’re all about strategies and they want to play together.”

Asked if Edge Space themselves envision a competitive future for the game, Mummery notes that it’s not something you can force, fake or throw money at.

“We would love that,” he says, “but we don’t think that’s ours to make. We can make a game that can work for an eSport, but we need people that want that to happen. You have to build up a community that love your game and want to play it competitively.”

“It’s not why we’re doing it,” adds Beale. “We’re doing it because we want to make a cool spaceship combat game.”