Many of the world’s most famous games studios have their roots in independent projects, backed by high hopes and little else. In that sense Ruffian Games are Benjamin Button, minus the brown leather jacket and silver-blue Triumph. Assembled around the kernel of a Crackdown 2 deal with Microsoft, the Dundee outfit were at their largest and most visible when producing their first game.

In the seven years since they’ve worked with Kinect, helped out on the Master Chief Collection and Ryse – the combat, specifically – and fought for the time and funds to chase their own ideas.

“We’ve jumped around a lot, to be honest,” says creative director Billy Thomson. “We’ve been in work-for-hire for years now so that’s one of the reasons that we want to do our own IP.”

Hotline Miami, one of Fragmental’s key influences, made our list of the best indie games.

The struggle of Thomson and his colleagues to steer their studio into more fulfilling territory has been apparent even from the outside. Nearly two years ago, Ruffian pitched Game of Glens – think World of Goo as an RTS – as part of Square Enix’s Collective initiative, but the internet didn’t bite. 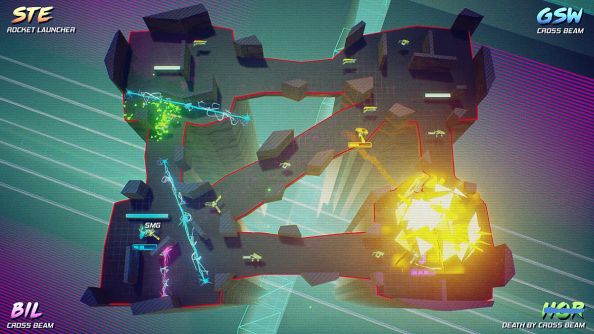 “After it never got any kind of momentum that kind of killed it internally,” remembers Thomson. “Sometimes you’ve just got to cut your losses, and it’s taken a while to get from that back to having a prototype team that we can fund for a period of time and get something out of them.”

Now approximately half the size of the Crackdown 2 team at its peak, Ruffian have a “bunch of guys” working on a secret project and eight experimenters on Fragmental.

“Fragmental came from our desire to be in control, come up with our own idea, see it through production, get it released, and make our own decisions,” says Thomson. “That’s not something that any of us have had the opportunity to do. Every time we’ve worked on a project it’s been publisher led, they’ve made all the major decisions as far as the market side of things are concerned – what we talk about, when we talk, who we talk to. 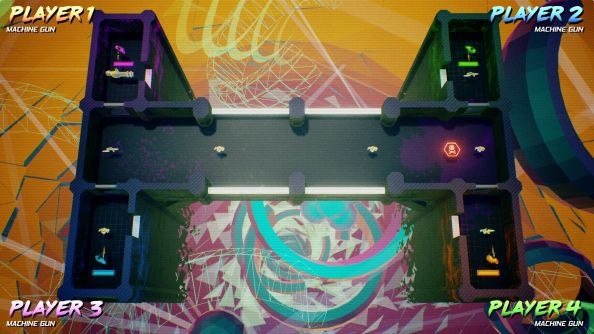 “We’re bound to make quite a few mistakes, but it’s probably the most fun that I’ve ever had in nearly 20 years of making games.”

Fragmental began with a suggestion everybody in the room agreed was awful. Designer Martin Livingston wanted to remake Capcom arena fighter Power Stone, and was promptly told to “fuck off – that’ll be shit”.

“That got shot down almost instantly,” recalls Thomson. “[But] somehow we moved to the elements of Power Stone that worked well: four-player, single-screen, battling it out in competitive couch play.”

The prototyping that followed pulled from Power Stone, single-screen classic Bomberman, and a contemporary touchpoint for swift slaughter: Hotline Miami. A few months later, Fragmental is a top-down arena shooter that employs Dennaton’s one-shot-kill mechanic, in which rounds last a handful of seconds. 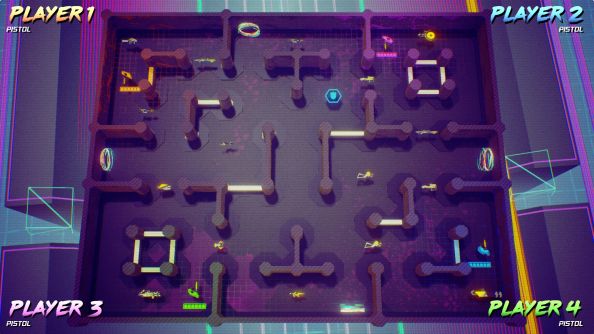 “It’s fast and unforgiving,” reckons Thomson. “It’s so fast that even if you get killed you’re back in the game within ten seconds, so you don’t get that Counter-Strike issue where you’re waiting five minutes to play.”

Just as encroaching walls ratcheted up any round of Bomberman that threatened to drag on, Fragmental features ever-tightening death beams. In the current build they’re triggered 20 seconds in, but are very rarely seen, so short is the average game. And yet play sessions are invariably long.

“What we’ve had to do in the studio is only play after half five or six [o’clock], because you end up wasting time,” says Thomson. “You’re not testing anymore, you’re just playing. It’s definitely got that feeling that I remember from Bomberman where you get mates round, have a few beers and end up playing all night.” 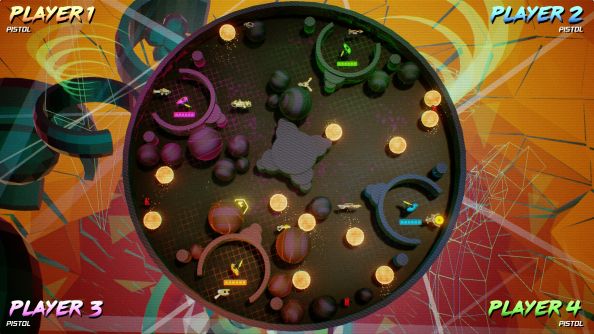 Every one of Fragmental’s colourful weapons is low on ammo by default. The idea is that even the best players are frequently forced to shift strategy and will never get too comfortable. Each second is stuffed with tactical decision-making based on what you’re carrying, what you’re opponent’s packing, and what the level looks like.

“If you don’t know what you’re doing with about half of the weapons, you probably will kill yourself,” Thomson warns. “It’s not until you start playing that you learn the things to do and the things to definitely not do.”

Ruffian have had to introduce testers slowly to the game with ‘Goldilocks’ builds – one initial set of levels free from modifiers and madness; a moderate build featuring some of Fragmental’s variety; and then, finally, a version that embraces all of its colour and chaos. 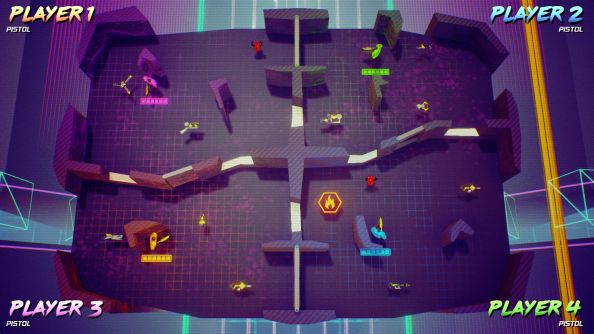 The sheer busyness of the game they’ve created has pushed the team towards a cleaner art style, designed to ensure the game remains readable even as the action gets OTT. Which, according to Thomson, it reliably does.

“I know that if we left the guys alone for an afternoon, they’d just play,” he says. “They’d have a tournament and it’d be on the whiteboards, seeing who’s in the lead. I’ve worked on a few games where I’ve gone beyond testing and ended up playing, and the times that’s happened, they’ve done well.

“[Fragmental] isn’t going to sell millions, but if people get the same level of enjoyment out of it as they got from GTA and Crackdown I’d be over the moon.”

You can find Fragmental on Steam Greenlight. Unreal Engine 4 is now free.

In this sponsored series, we’re looking at how game developers are taking advantage of Unreal Engine 4 to create a new generation of PC games. With thanks to Epic Games and Ruffian Games.