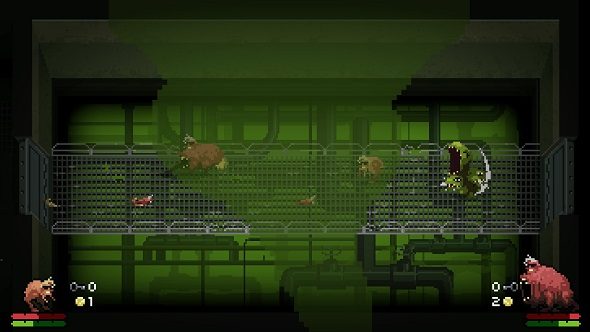 In most games, it’s your job to kill infected or mutated monsters, not shapeshift into them. Mandragora are seeking to change this with their new game Freaky Awesome, which has players transforming into hideous freaks by eating the remaining of radioactive baddies. Yum.

If you’re looking to play as a group, have a gander at these PC co-op games.

Entering the sewers of an abandoned nuclear power station, you and up to three friends becoming horrifically disfigured by toxic waste. While obviously putting you under a great degree of distress, these mutations give you access to special powers like a super stretchy tongue or the ability to poop out eggs which spawn minions. In order to escape the power plant and no doubt turn back to normal, you must fight through the legions of other malformed horrors while avoiding the various traps placed around this oddly built facility. The facility layout mutates on every new playthrough, so expect new trap and monster placement on every new outing.

The pixel renditions of these monsters are suitably grotesque, with bulbous growths and tons of green stuff oozing out of several orifices. You can change your form by eating the remains of different monsters, with the trailer showing off one form which looks like a human head attached to bird legs, while the other looks like a massive flesh-coloured witchetty-grub.

Developers Mandragora are not strangers to roguelikes, having released the hotel based roguelike Skyhill last year. Freaky Awesome looks certainly more creative than their previous work, with mutating and killing monsters with friends sounding like a right laugh.