Out of the box, Freeman: Guerrilla Warfare gives you a lot of options when it comes to building your army of rebel fighters. The concept is basically ‘Mount & Blade, but with guns,’ and there’s certainly a receptive audience for a pitch like that. Now, Freeman is getting ready to change the game up even more: the developers have opened it up to the Steam Workshop.

The video below showcases some of the things modders will be able to do with the game now that it’s on the Workshop, and you see a few of the more obvious ones first: Lead a squad of soldiers on the Eastern front of World War II, or become the captain of a detachment of space marines. The clips show off brand new assets and maps, and it’s exciting to imagine what modders will end up doing with this sandbox game now.

Of course, one thing they’re guaranteed to do is fill the whole thing up with anime ladies. Developer KK Game Studio has anticipated this, and have even included a clip showing off what it might look like when this inevitably happens. 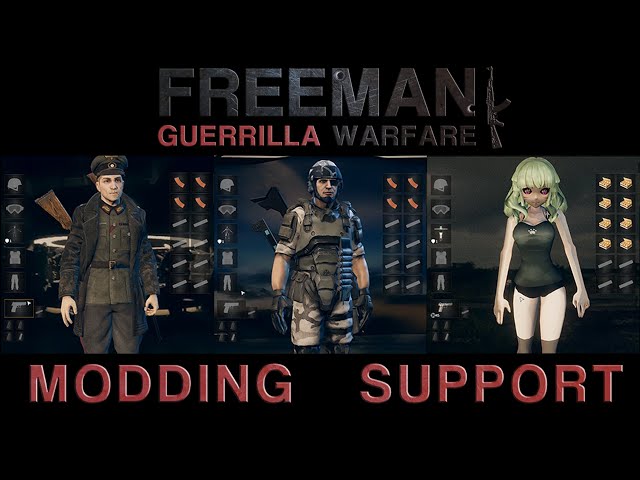 Regardless of how you feel about anime women, modding support via the Steam Workshop is an exciting development for Freeman: Guerrilla Warfare. I’m much more keen to see what modders do with the game’s actual mechanics, although the aesthetics changes and new weapon models are bound to be fun as well.

It’ll depend a lot on how much modders can really get into the game’s guts and overhaul things. Will it be possible to, for instance, mod in an actual Mount & Blade: Warband army to fight against your rifle-wielding guerrillas?

There’s not much on the Workshop page yet – just a single mod that adds in the Second Sino-Japanese War of 1937, which is an official mod from KK Game Studio – but that is bound to change pretty quickly.