Frostpunk is surprisingly easy as far as management games go. I completed its campaigns on the first attempt. But it’s how I found success that makes Frostpunk special.

To keep my city alive I had to do monstrous things. When the mines froze I sent in teams of workers to clear the ice: 45 people died. When the great storm came I only treated people with light illnesses and left the others: 98 people died as a result. And, when discontent rose, I started executing my own people, strapping them to the underside of my city’s great heater: three people murdered. Frostpunk isn’t about managing a city as much as it is a game about managing your own moral decline.

Frostpunk is set in a Victorian-era world headed for a deep freeze. When the encroaching ice age was discovered, people began building cities in sheltered craters that were to be heated by a giant coal-powered engines. But the cold snap came too soon and so the cities were left unfinished. You play the head of a group of survivors who have marched across the ice to one of those heaters – you need to get it running and build the infrastructure to keep it that way.

The engine sits frozen at the start of every scenario, waiting for you to flick the ignition to set the heart of your city beating. From the moment the engine roars into life you have to keep it fed with coal. It is the constant need of every aspect of your arctic outpost – without heat your people will freeze, your crops will fail, and your factories will stall. Every structure you build is placed on a radial grid that expands from the engine’s centre. By the end of a mission, buildings ring the heater like spokes on a wheel, a tragically symbolic bookend for humanity’s final technological achievement. 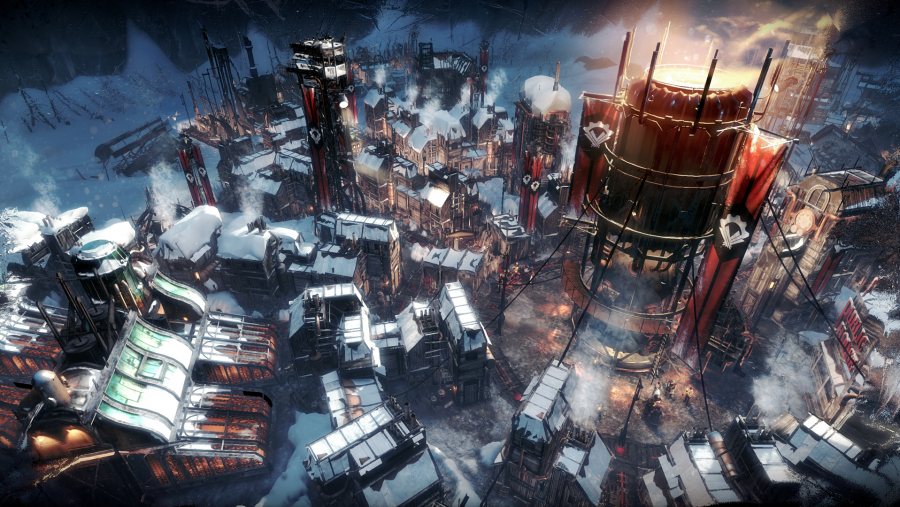 11 Bit Studios has done marvellous work on evoking the symbolism of the engine giving life. As soon as the engine starts, it begins belching a heavy plume of black smoke, the ground around the stack is bathed in orange, and the snow melts away. You can tell if a building is heated or not by how much snow and ice covers its walls and roof. In contrast, everything outside of the heated area is locked in ice and smothered in snow.

Getting your city started is easy as there are loose piles of resources to be scavenged nearby. That’s enough to construct tents to shelter your survivors from the worst of the storm, as well as a hunting lodge and cookhouse. which let you start bringing raw food in and turning it into rations for your people. You can even build a workhouse and begin advancing the tech tree, increasing the speed your citizens gather resources or discovering new kinds of structures with which to expand your city. Then the demands start coming in. 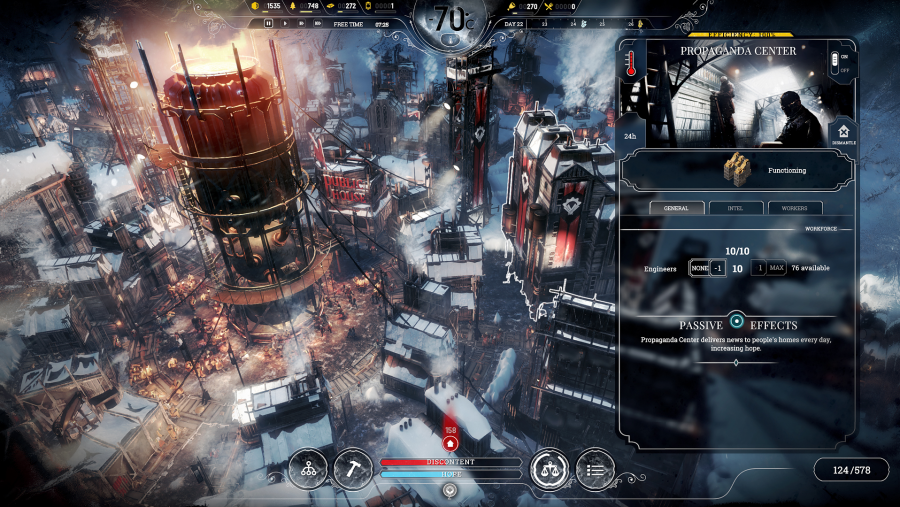 Your people are a needy bunch. At any moment you might have a speech bubble appear above your city, denoting a complaint or demand that needs to be answered quickly: “Our houses are too cold,” “There are too many sick,” “We’re hungry.” If you can answer the demand in time your people will become either more hopeful or less discontented. Fail and they will lose hope. If a city’s hope falls too low, or its discontent rises too high, your people will rebel.

Successfully juggling all of these needs is where Frostpunk is at its most challenging. Your people are hungry, so you take some of them off coal mining duty to go out looking for food. The sick are piling up so you turn the heat up on the engine to warm them better, increasing the drain on your coal supplies. It’s times like these where you are going to be most tempted to draft in some unsavoury laws. 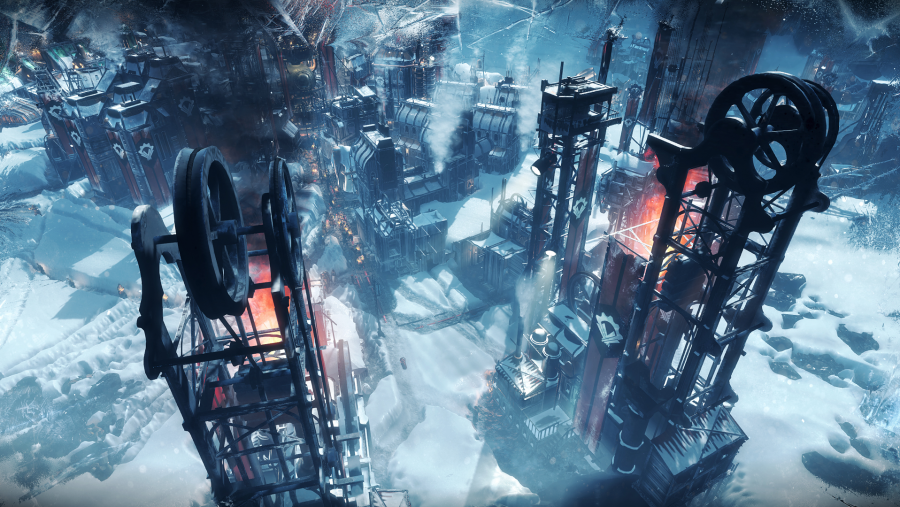 On the first night all my people froze to death. The -20 degree cold made fast work of the huddled families. Their fingers stiffened, their toes numbed, and one by one they became still as statues. Silly, really: I’d forgotten to turn on the coal-burning generator at the centre of my town.

Each day or so you can enact a new law. It can be something innocuous like saying you will bury your dead in a cemetery or in a icy pit outside of town, but it can also be more dramatic, like passing child labour laws. When your workforce is low, you can practically double it by allowing children to work in the factories. People will lose hope but your resource gain will increase massively.

That’s basically how my descent into becoming a monstrous dictator began. Whenever I hit up against a shortage or a crisis I’d take the option to make that problem go away, whatever the solution was. The second scenario, which charges you with keeping a set of seed banks warmed through, is a cake walk if you make no attempt to save the nearby city that hasn’t got enough resources to make it through the coming winter. I didn’t risk my mission to help others. Technically, I won, but the hundreds of frozen corpses in the next city over will probably continue to haunt me. 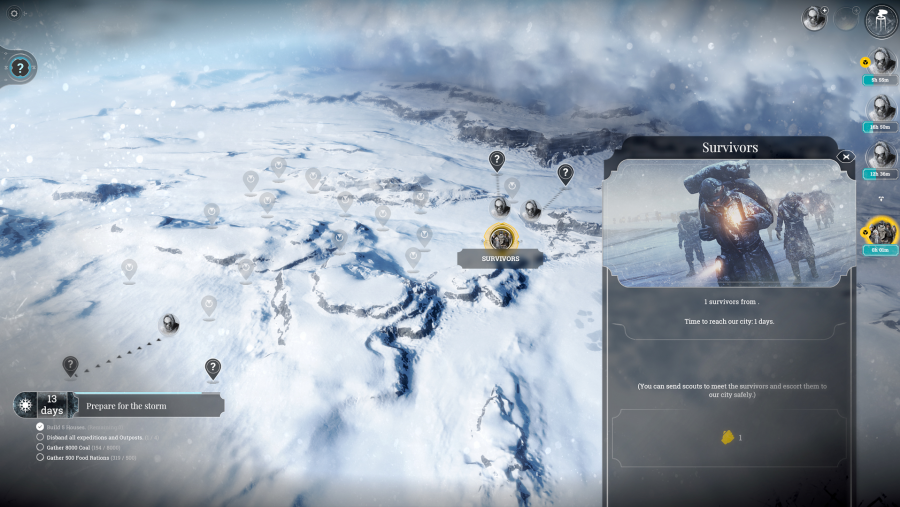 Coaxing players into becoming heartless is familiar territory for 11 Bit Studios, its previous game This War Of Mine has you separate the world into your group of survivors and everyone else. It gets harder to survive without taking from innocent people who just happened to be in the way of your resources. Frostpunk’s target is similar as it challenges the idea of survival at all costs. Like the smoke billowing-heater at the heart of your city, life can be shrouded in dirt.

Frostpunk is a management game that doesn't concern itself with micromanagement, it is focused on the macro moral decisions of a leader.