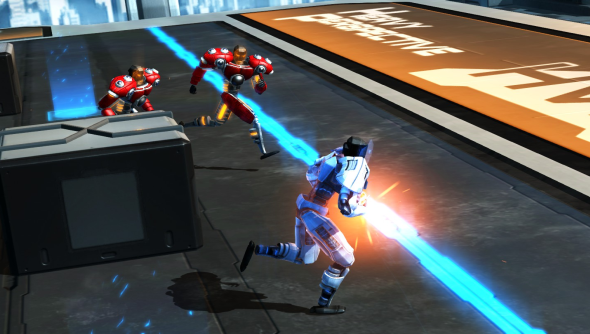 Turn-based action strategy sports thing Frozen Cortex is about to emerge from its Early Access chrysalis as a beautiful, shimmering and fully formed frozen butterfly.

The tactical ball-grabber, which was originally titled Frozen Endzone*, will be fully released on Steam in the UK in just a couple of hours, as well as on the Humble Store and Mode 7’s website. It’s really rather a good little game, and it’s already enjoyed critical acclaim even as an Early Access title.

Frozen Cortex puts you in charge of a team of robotic sports people who can use a variety of techniques, both violent and otherwise, in order to tactically outmanoeuvre and triumph over a rival team.

Our Julian is quite the fan, outlining the features of the game’s most recent update, which introduced a slew of new game modes. A single-player campaign allows you take a team through a league, facing AI opponents and spending your income on new players. A sort-of-rogue-like Knockout mode wipes your entire league score should you lose a single game, while the Random League mode chuck you into a game against an opponent of unknown ability. Which sounds like the least fun of the three, to be fair.

Anyway, it’s out now so do take a look. Here’s the launch trailer.

*Likely changed due to the unfortunate ‘Frendzone’ contraction, or the image it conjures of a bum with icicles coming off it.