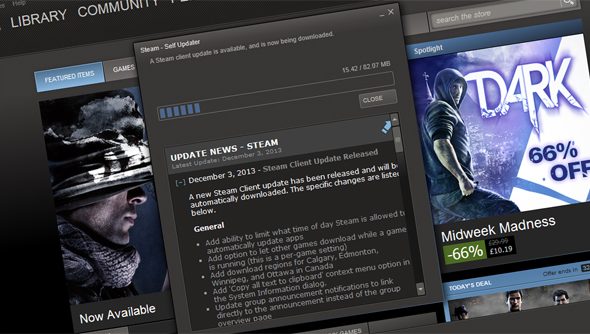 If you’ve approached Steam in the last 12 hours you’ll have been asked to humour it for a couple of minutes while it turns itself inside out with a new client patch. Nothing new about that – but in doing so, you’ve ensured that it won’t update itself in quite the same way again.

Last night’s download, y’see, was all about downloads. And it’s introduced a couple of changes that ought to make life on Steam an awful lot more palatable.

You’ll finally be able to download games and their updates while another game is running. This’ll need to be okayed on a game-by-game basis, presumably in the name of maintaining performance in whatever you’re playing – but the option’s there.

Even better, if there’s a new update available upon starting up a game, you’ll now be asked whether you want to wait for it or plough on with the existing version. And the client will now delay Steam updates like this one until there are no games running. Sensible.

What’s more, download rates should have improved for users with “high throughput but high latency” connections. Perhaps that’s an issue you’ve been aware of. Perhaps it isn’t, and you’re about to receive an unexpected and pleasant reduction in your Christmas gaming wait time.

An array of other minor improvements await – particularly if you’re an early adopter of Big Picture mode or Steam for Linux, you proto-Steam Machinist, you. What stands out in the ginormous list below?