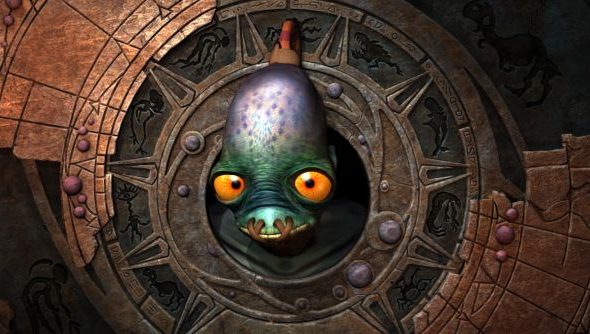 Games do a lot of things well – driving the car, shooting the gun, interacting, questing and progression. Something often missing is comedy. It’s either not there, or it’s so throwaway and uncared for it barely matters. Genres that were good for it, like adventure games, have slowly died out, while what we have now is less suited. Lorne Lanning, the man behind the Oddworld series, agrees, and wants to help bring the laughter back.

The laughter never stops during E3 week – for more PC gaming news hit up our homepage.

“In many ways, our games were kinda always inspired by Looney Toons,” he explains. “Really like silent movies, over-exaggerated acting. Funny moments that Mel Blanc [voice of Bugs Bunny and most of the rest of Looney Toons] voiced, not that we’ve ever come close to the genius of Mel Blanc, but if we could capture that stuff so that when things go wrong – this is something that’s missing from games: laughter. We don’t laugh enough in a lot of the games.

“I was watching the South Park: The Fractured But Whole and it’s like a game where you expect the mechanics are going to be terrible and they probably will be and it will be absolutely fine, just like the animation in the show. I remember people going ‘that animation is terrible!’ and I was like ‘if you think it’s about the animation, man, you [need to start paying attention] to story content, cause that is hilarious’

“We always wanted to have this, like, where you’re laughing a lot, and that’s key. We’re kind of all sick bastards in our own little ways, that’s why I think South Park is so popular and shows like that, The Simpsons, the pre-cursor to that kind of relevant zanyness. Things like Dr. Strangelove, where it’s like really heavy themes but it’s told in this just hilariously brilliant way. So if we can tell it in a hilariously okay way, then maybe we’re doing alright.”

He goes on to say that he knows it’s not something a lot of games are trying, and expects that when they do, it’s not really their fault.

“Most games aren’t trying to be, kind’ve like most shows are just trying to be dramas, they’re not trying to be comedies. I think comedy is also – if you’re relying on the dialogue to have a funny game, it better be South Park, really do it,” he says. “But when I watch games that are really trying to be a shooter and they’re layering on some dialogue to try and be funny it feels really forced to me. It feels like the marketing department came up and said ‘hey, people want more jokes today, guys you gotta get more jokes into this game’ – meanwhile they were building Doom and they’re like ‘f*ck, now we gotta do jokes.’ Sometimes it works but a lot of times it doesn’t.”

He also appreciates the difficulties games faces in trying to make comedy work, because of what makes things funny. “Comedy’s really all about timing, this is the thing when you look at Looney Toons type of animation, it’s all about these extremes and the timing. They were economy animation, but what makes the joke funny, right, is two people tell a joke, one of them tells it terribly, the other tells it great, it’s the same joke – timing is key. That means you have to design from the core that you’re trying to make something that’s hilarious.

“When I’m directing the animators and stuff, oftentimes I say your problem is you’re trying to be good at animation and trying to be realistic at it. But the reality is, I want to see when Bugs Bunny got shocked, I don’t want to see when the movie character got shocked. I’m oftening telling animators ‘guys, more pain, I’m not seeing the pain in that character – look, if I lit you on fire, I guarantee you you’re going to be moving a lot faster and doing a lot more things than that guy is right now.’”